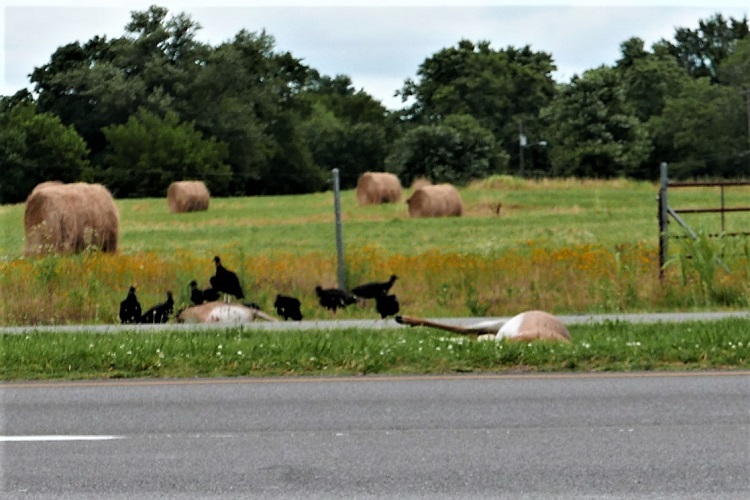 6/13/2018 looking across Broad Street from in front of Animal City and the bowling lanes. One deer is in the grassy median and the other is on the side of the outboud lane.

Murfreesboro continues to be the tenth fastest growing cities with a population over 100-thousand in the United States. That may be bringing more quality jobs to the community, but it's creating a challenge for deer, turkeys, raccoons, groundhogs, skunks, and more.

That is becoming more obvious daily in the downtown areas of Murfreesboro. Deer and turkey sightings within blocks of the town square are not unusual. Remember the deer that crashed through a plate glass door awhile back, and that was just two blocks from the courthouse. Tuesday, two deer were killed while trying to cross Broad Street at Animal City and the bowling lanes.

The Tennessee Wildlife Resources Agency says that more than 90% of the land in the Volunteer State is privately owned. To successfully manage this state's wildlife resources, TWRA must work cooperatively with private landowners across the state. Many landowners desire property that is welcoming to wildlife species and some may need technical assistance to accomplish their goals and vision.

TWRA has Wildlife Habitat Biologists throughout the state whose primary job is to assist landowners with technical assistance and managing their property for wildlife.

The state wildlife group says this is becoming a problem across the state. In fact, we are now having confirmed black bear sightings in neighboring counties. Yes, just like the deer, raccoons and turkeys--the black bear is being pushed out of his natural environment. In fact, bear populations in Tennessee are growing, and re-colonization of former range continues.

Black bear sightings have been confirmed in neighboring Dekalk, Smith, and Sumner counties, along with the Cumberland Plateau, as well as Pickett, Cumberland and Fentress counties.