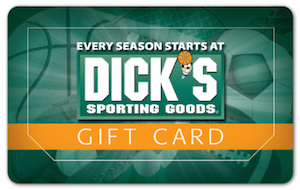 Two Dick's Sporting Goods gift cards, valued at five-hundred bucks, were stolen from the Medical Center Parkway retailer. The store manager told Murfreesboro Police an unknown black female took two gift cards by tricking the cashier. The manager reported this several weeks after the May 15th incident after other stores around Middle Tennessee reported similar scams from a woman with the same description. The manager told police he believes she's from Alabama.