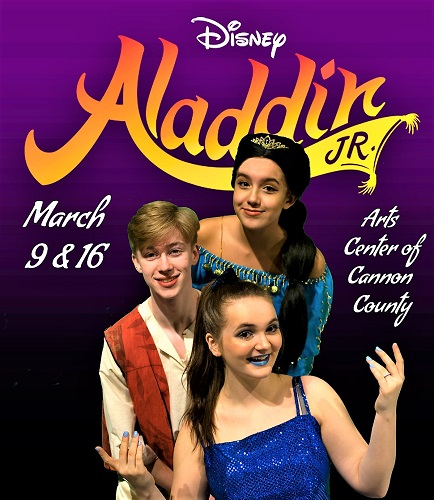 "Disney's "ALADDIN, JR" is being presented the next two Saturdays at the Arts Center of Cannon County in neighboring Woodbury. There are only 2:00PM Saturday matinees on March 9 and 16, 2019.

All of your favorite characters from the hit Disney film - Aladdin, Jasmine, Iago, Jafar, the Genie, and more - are here in Disney's Aladdin Jr., a musical adventure filled with magic, mayhem, and flying carpet rides!

The magical story has been given the royal treatment as Aladdin and his three friends, Babkak, Omar and Kassim, are down on their luck until Aladdin discovers a magic lamp and a genie who has the power to grant three wishes. Wanting to earn the respect of the princess, Jasmine, Aladdin embarks on an adventure that will test his will and his moral character. With expanded characters, new songs, and more thrills, this adaptation will open up a whole new world.

This production is rated a kid-friendly G and is sponsored by Saint Thomas Stones River Hospital. Aladdin, Jr. is directed and choreographed by Matthew Hayes Hunter with music direction by Peri Watson, and produced by Lindsey Duggin.

Tickets are $10 for adults and seniors and $7 for students and may be purchased Tuesday through Saturday 10AM-4PM by calling 615-563-2887 or online at artscenterofcc.com and (subject to availability) at the door one hour prior to show time.

The Arts Center is located on 1424 John Bragg Highway, just west of the town of Woodbury, approximately 20 minutes from Murfreesboro, Manchester, and McMinnville and one hour southeast of Nashville. Office hours are 10:00a.m. to 4:00p.m., Tuesday through Saturday. For more information call 615-563-(ARTS) 2787. Check out our web site at www.artscenterofcc.com.

Founded in 1990, the award-winning Arts Center of Cannon County is a unique model for rural arts organizations. Situated in an under-served rural area in a town of 2,000 and a county of 12,000, The Arts Center annually attracts more than 40,000 visitors from a region covering over a 100-mile radius. Drawing on the blue-collar roots of its community, the organization focuses on self-sufficiency, fiscal responsibility and social entrepreneurship. The Arts Center is partially funded by the Tennessee Arts Commission, Southern Arts Federation and the National Endowment for the Arts.