Do you recognize this suspect? 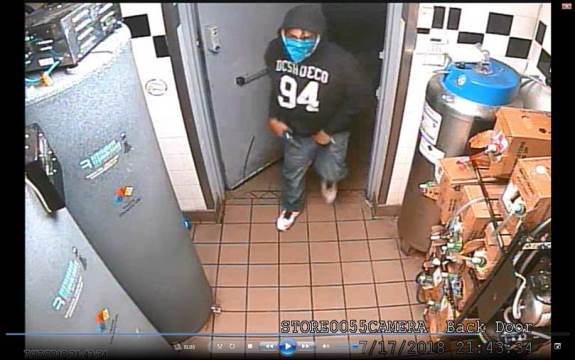 In nearby Antioch, Nashville Metro Police detectives are working to identify the gunman who on July 17th robbed the KFC at 5321 Hickory Hollow Lane.

The suspect, armed with a semi-automatic handgun, entered through the restaurant's back door into the kitchen where he demanded cash from the manager. The manager complied. The gunman fled on foot.

The suspect is a black man who appears to be in his early 20s. He is approximately 5'8" tall with a thin, muscular build. He wore a black hooded sweatshirt with DCSHOECO 94 on the front in white letters.

Anyone who recognizes the suspect from the attached surveillance photo is asked to contact Crime Stoppers at 615-742-7463. Callers to Crime Stoppers can remain anonymous and qualify for a cash reward.