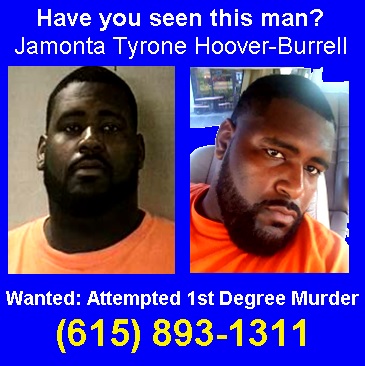 Murfreesboro Police were called to a second shooting a little over 3-hours later. This was after they investigated a fatality that was only a few blocks from the earlier call. At 1:49AM Sunday (9/2/2018) morning a call of a shooting at 618 East Vine Street was received.

Upon arrival, officers learned that there had been a domestic argument between two (2) brothers. According to witness statements, Julius Harris was shot by his brother, Jamonta Tyrone Hoover-Burrell.

Harris was transported to Vanderbilt University Medical Center where he underwent treatment for his injuries.

Anyone knowing the whereabouts of Hoover-Burrell is asked to call the Murfreesboro Police Department at (615) 893-1311.