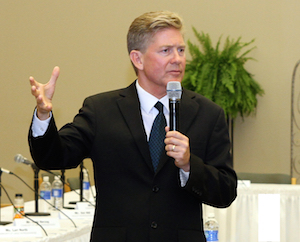 Dr. Anthony G. Kinkel was named the new president of Motlow College during a special called meeting Wednesday of the Tennessee Board of Regents (TBR). Kinkel, who will begin his new position on Aug. 1, will become the institution's sixth president. He succeeds Dr. MaryLou Apple who will retire June 30.

According to TBR Chancellor John Morgan, "Dr. Kinkel is a leader with a commitment to service, to helping students reach their potential, and to understanding the workforce and education needs of the communities he serves. In addition to his previous work as a college president, he will bring teaching, administrative and policy making experience to the role, a distinguishing combination. We expect him to carry on the momentum of the campus and continue its progress in the Drive to 55 for Tennessee."

Kinkel was chosen to lead Wichita Area Technical College, one of the largest two-year colleges in the Kansas Board of Regents System, in December 2010. During his tenure, enrollment has grown 15 percent, the college's National Center for Aviation Training was selected by the National Association of Manufacturing to develop the national standards in aviation curriculum, the number of students earning a credential doubled, and job placement increased each year.

Kinkel served as chancellor at the University of Arkansas Community College at Batesville from 2004 to 2007 after leading Maryland's community colleges as state director for the Maryland Association of Community Colleges. He was also the dean of general education at Northwest Technical College and previously taught political science at Central Lakes Community College in Minnesota.

Kinkel's early career was in public service, having been elected at age 24 to the Minnesota House of Representatives, where he served 12 years. He was elected to the Minnesota Senate from 1999-2002. He is married to Melva Kinkel, and they have two sons, Bret, 28, and Kellen, 14.