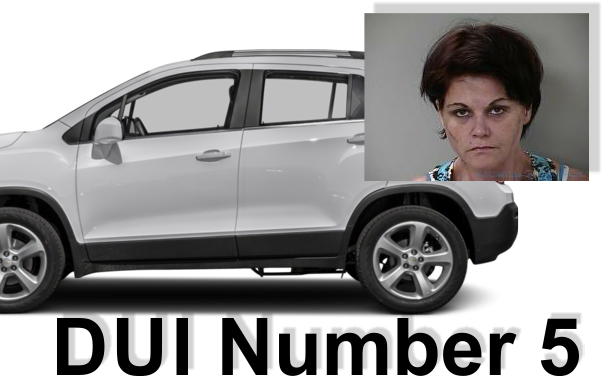 A woman from Manchester was arrested in Murfreesboro and charged for the 5th time with DUI. 35 Year old Brandy M. Griffin was involved in an accident on South Church Street at Indian Park Drive around 8:15 Sunday night.

When police arrived on the scene, witnesses and the driver of another vehicle involved in the crash were standing by with Griffin. Officer D. Sanders wrote in a report, "I observed Ms. Griffin unsteady on her feet. Also, I observed her slurred speech and drowsy behavior."

To make matters worse for Griffin, police say that she had three children in the SUV with her. Two of the kids were said to be hers and a third was a "family friend."

As police were speaking to the driver of the other car involved in the accident, Griffin wandered off. Police then searched for the woman and found her minutes later. Police say they also found a plastic bag where she was standing that contained several prescription pill bottles for painkillers. Two of the bottles in the bag were not prescribed to Griffin.

DCS was called about the children and Griffin was charged with DUI number 5, Tampering with Evidence, Possession of a Schedule II and IV drug and Felony Reckless Endangerment. She was booked into the local jail under a $25,500 bond. The Manchester woman is due in a Rutherford County courtroom on August 16, 2016.

As of Monday night at 9:30, Griffin was still behind bars.