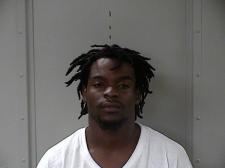 A 25-year old Eagle Street man has been charged with auto burglary after a Murfreesboro Police investigation. Officer Jeffery Pulford reports being called to Student Quarters Apartments last Thursday after a maintenance technician reported a black man walking up to a black Lexus several times to try to enter the vehicle.

Officer Pulford then canvassed the area in search of a suspect, as described by the maintenance technician. That's when he found Brandon Lawrence at nearby Campus Villa Apartments, at 902 Greenland Drive. After making contact with Lawrence, it was discovered he had a vehicle key in his front pants pocket for a Lexus automobile. They key fit the black Lexus at Student Quarters. After questioning at the police department, Lawrence was arrested for auto burglary and theft over one-thousand dollars. He'll be in General Sessions Court on January 26th to answer to the charges.