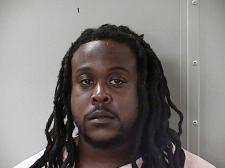 Kevin L. Howard was the only one arrested in the traffic stop. Mr. Payne was issued a citation.

About 80 Xanax pills, 9 soft Ecstasy pills a Mason jar of marijuana, and 21.6 grams of Molly Crystals were recovered by Murfreesboro Police during a traffic stop on Memorial Boulevard this past Monday afternoon around 12:30. Police pulled the car in question over due to the passenger not having his seat belt on.

Arrested was 28 year old Kevin Howard, who was the reported unbuckled passenger in the car being driven by 21 year old Eric Payne.

When police spoke to dispatchers, they learned that Mr. Payne was an alleged gang member from Chattanooga, according to the arrest report filed for Kevin Howard. Payne also admitted to being on probation and to possessing the marijuana found in the car. Payne was not arrested, but instead issued a citation for possession of a schedule six drug.

Police say that Mr. Howard was the one who possessed the larger quantity of illegal drugs that included Ecstasy and Xanax pills along with the Molly Crystals. Therefore, Mr. Howard was charged with the felony possession of a schedule one and a schedule four drug. He is due in court on September 26, 2017.