Extra, Extra--"Newsies" NOW at Center for the Arts 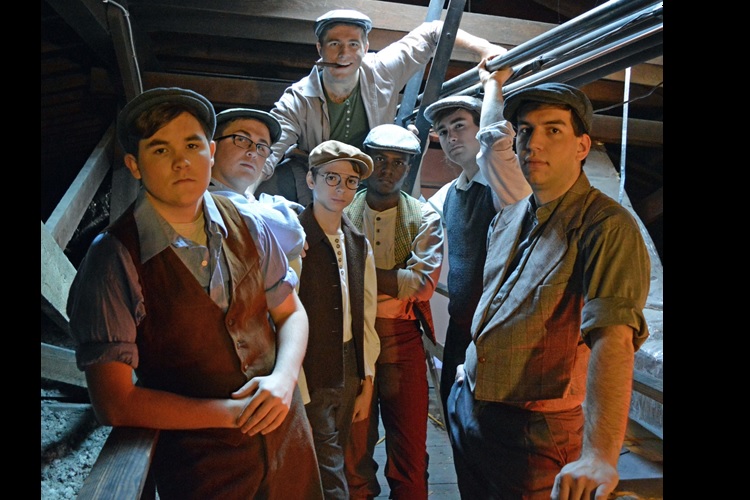 (MURFREESBORO) Extra! Extra! Disney's Newsies - the film, turned Tony Award-winning Broadway show, kicked off the 2019 season at The Center for the Arts and continues now through January 27, 2019.

Based on the 1992 movie about the true story of the newsboy strike of 1899, the show inspires everyone to seize the day and fight for what's right.

"This cast of Disney's Newsies is top notch!" said show Director Mark David Williams. "The singing, the dancing, the dedication, and work ethic already displayed is beyond anything I hoped for. I promise this is going to be one of the best shows ever produced by the Center!" Mark David Williams is the Artistic Director of the Center for the Arts and has appeared in many shows including Jekyll & Hyde The Musical (Jekyll), Hairspray (Corny Collins), and Pirates of Penzance (Frederic).

When Joseph Pulitzer (Adam Boe) decides the easiest way to fatten his bottom line would be to raise the price of the newspapers for the newsboys who distribute them, Jack Kelly (Nicholas True), a charming but cheeky Newsie, decides that he's tired of the publishing giants exploiting him and the other Newsies in town. With the help of Davey (Callum Ammons), Les (Jude Williams), and journalist Katherine Plumber (Isabella Kearney), they rally the newsboys from all over the city to form a union and go on strike, where they discover that wrongs can be righted - if they're united.

The Center for the Arts production also features Tucker Young as Crutchie, Drew Harris as Race, CFTA staff member Russell Forbes as Finch, along with an incredible ensemble wearing many different hats and performing choreography by Brittany Griffin.

With book by Harvey Fierstein, music by Alan Menken, and lyrics by Jack Feldman, Disney's Newsies opened on Broadway March 29, 2012. Ben Brantley of The New York Times wrote, "Mr. Feldman's lyrics are spot-on, while the melody reminds us just how charming a composer Mr. Menken...can be."

Tickets start at $14 and are currently on sale at BoroArts.org, by calling 615-904-ARTS (2787), or at the Center for the Arts Box Office, 110 West College Street, in downtown Murfreesboro.

This production is rated PG.

ABOUT THE CENTER FOR THE ARTS:
The mission for the Center for the Arts, Inc. is to enhance the quality of our community by providing a variety of arts and opportunities which will educate and entertain people of all ethnicity, ages, and income levels. The Center for the Arts will advance art awareness through quality theatrical productions, musical performances, art exhibits, educational programs, life-long learning and community activities thus improving overall quality of life in our community.