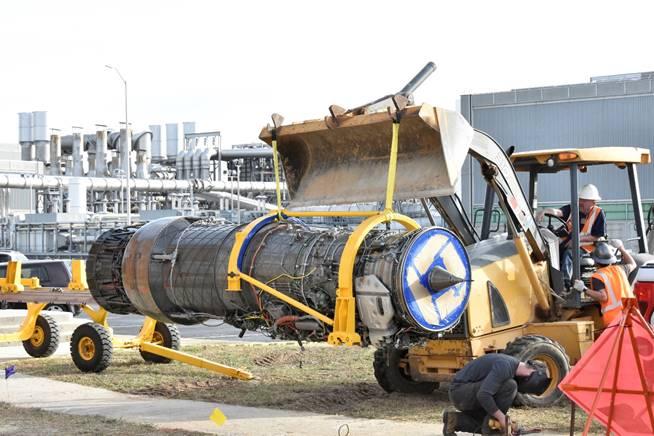 Workers install an F100 engine for display outside of the Engine Test Facility at Arnold Air Force Base. The installation of the display was completed in late 2019 and coincided with the 50th anniversary of the first operation at Arnold AFB involving the F100, which occurred on Dec. 18, 1969. Since then, Arnold Engineering Development Complex has logged over 23,000 hours testing the F100 engine in numerous test facilities. (U.S. Air Force photo by Bradley Hicks) (This image was altered by obscuring badges for security purposes.)

ARNOLD AIR FORCE BASE, Tenn. - A monument to the longstanding relationship between Arnold Engineering Development Complex and the F100 engine now stands outside of the Engine Test Facility at Arnold Air Force Base.

A static display of the engine was installed outside of the ETF in late 2019. This coincided with the 50th anniversary of the first operation at Arnold AFB involving the F100, which occurred on Dec. 18, 1969, in the T-4 engine test cell.

The engine on display is a Pratt & Whitney F100-PW-229. Built in 1987, it served as a prototype engine built for flight qualification of the -229 variant of the F100 and differs only slightly from a production -229. The engine was sea level tested at Wright-Patterson Air Force Base, Ohio. After testing there, it was sent for flight qualification testing and became the first -229 to fly. Its maiden flight occurred in the spring of 1988 at Edwards Air Force Base, California, when it flew in the left engine bay of an F-15 Eagle. Several months later, the engine made its first flight in an F-16 Fighting Falcon.

When Arnold AFB Civil Engineering was asked to assist with developing a Statement of Work for a permanent display of the engine, it was being stored in in the Aeropropulsion Systems Test Facility Exhauster Building at Arnold.

The engine now on display is approximately 16 feet long and has an approximate maximum external diameter of nearly 4 feet. Its approximate dry weight is 3,740 pounds.

The work to set up the display was completed utilizing the Simplified Acquisition of Base Engineering Requirements contract vehicle. The prime contractor for the SABER contract was Service Disabled Veteran Enterprises, LLC. Workers with Henley Construction and Welding Unlimited, the subcontractors hired by SDVE, completed the metal fabrication, concrete installation and mounting of the display.

Prior to its installation, the engine was cleaned and a clear coat applied by Volunteer Paint Company, also working for SDVE.

The F100, manufactured by Pratt & Whitney, was developed under the Advanced Turbine Engine Gas Generator program in the late 1960s. This was a joint program between the U.S. Air Force and U.S. Navy, and the chosen engine was to power the F-14 Tomcat and the F-15. When the Navy backed out of the program, the F100 was fielded by the Air Force in the early 1970s.

AEDC has continued support of the F100 ever since the first test and has been involved with all of the production versions of the F100 along with several of the developmental versions. This testing has included altitude and sea level development, accelerated mission testing, alternative fuel testing and aeromechanical validation.

The F100 display was installed outside of the entrance to the ETF lobby across from the static display of the TF30 engine. Like the TF30, a plaque will be placed beside the displayed F100 to provide data on the engine along with information on its history and its ties to Arnold. 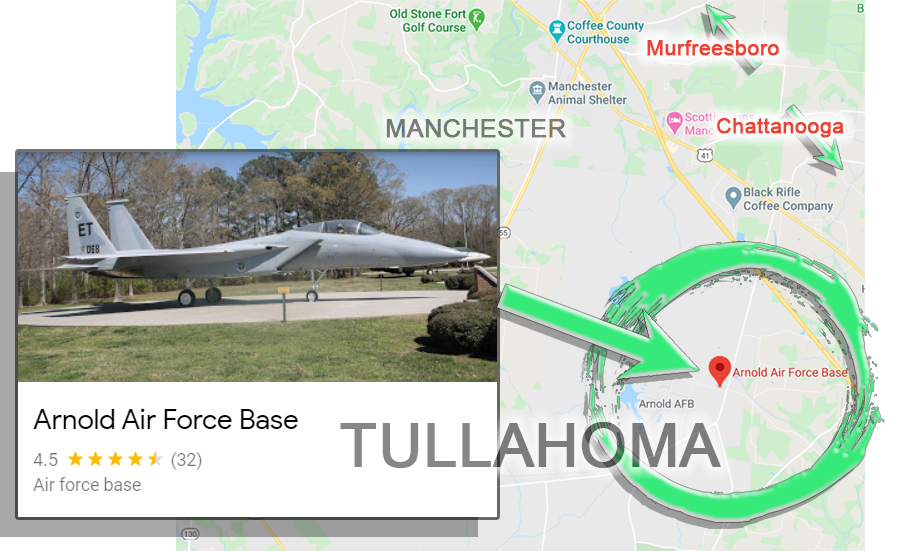