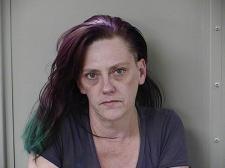 A 43-year old Fall Creek Drive woman has been arrested on charges of theft and forgery by Murfreesboro Police.

Officer Sagrera called the name on the check, which came back to a victim in Smyrna who reported to police there several blank checks were stolen.

With cause, the officer then searched and found additional checks, driver licenses and social security cards and information that didn't belong to Serrao. It was all taken into evidence as the suspect was taken to jail, facing theft and forgery charges.