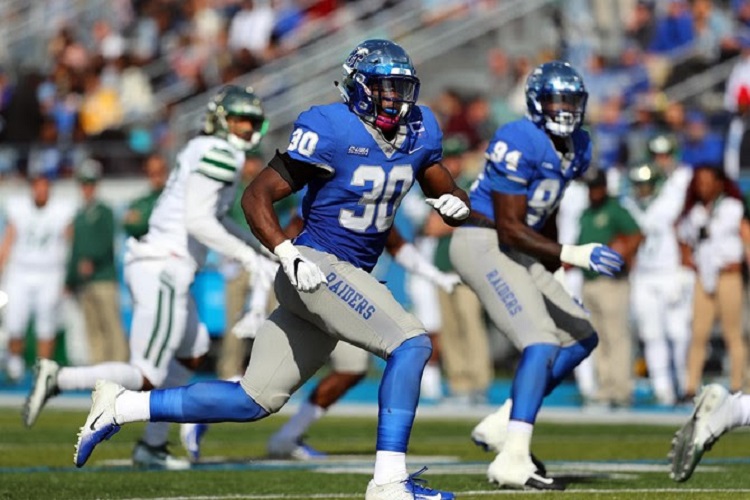 It wasn't pretty, but Middle Tennessee captured a homecoming victory Saturday over Charlotte 21-13.

The rebound for the Blue Raiders (4-3, 3-1) after their loss to FIU the week prior was much-needed to keep track in the Conference USA East Division standings. With the win, MT is now 4-0 all-time against Charlotte, including a 2-0 mark at home.

"Really, really happy and proud of our team," Raider Head Coach Rick Stockstill said. "It was a great win, and we knew it was going to be a four-quarter game coming in here. That's what we got.

"Let's dance ... we won, and there's nothing to be mad about. That was a great win, and it's hard to win football games, it doesn't matter who you play. I'm fired up."

Middle Tennessee's offense struggled for most of the game to find consistency against a Charlotte defense that went into the game ranked third in C-USA in total yards (329.8 allowed per game). The Blue Raiders managed just 144 total yards (33 rushing).

Luckily, the blue and white were gifted with a heck of a game from their defense.

The 49ers scored on their first drive via a 57-yard rush by C-USA second-leading rusher Benny LeMay, but that's all MT would allow until a garbage-time touchdown with just over a minute left in the contest.

Charlotte was forced to punt six times, turned the ball over on downs three times, missed two field goals and gifted Middle Tennessee with two turnovers on 13 drives between the TDs. The Blue Raiders finished with four sacks and nine tackles for loss.

"No matter what, we just try to put the ball down and play defense," redshirt junior linebacker Khalil Brooks said. "We take pride in everything we do ... and believe in running to the ball to lead to gang tackles. We were pretty good at that today."

The 6-0 Charlotte lead after LeMay's rushing touchdown in the first quarter lasted all the way until the 6:23 mark of the second, when redshirt senior quarterback Brent Stockstill hit junior Ty Lee for a 29-yard score to give MT a 7-6 advantage.

Before the seven-play, 69-yard drive, Middle Tennessee had managed just 15 total yards in 16 plays with only one first down. The long drive seemed to jumpstart the whole team at the right time.

In the subsequent Charlotte possession, quarterback Evan Shirreffs was picked off by MT senior safety Wesley Bush, who was playing in place of fellow senior Jovante Moffatt.

Bush returned the interception to the 49er 15-yard line, and five plays later, Stockstill hit Lee for 5 yards for the duo's second TD of the game.

"There were some big plays that helped us out a lot and really changed the momentum of the game," Bush said. "I wish we could've capitalized as a defense by scoring on them, but we gave it to our offense and they did a good job with it."

The Blue Raiders would take advantage of another interception, this time by O.J. Johnson, in the fourth quarter, pushing the lead to 21-6 after a short, 22-yard drive.

Middle Tennessee's defense was led in the tackles department by Brooks, DQ Thomas, Bush and Darrius Harris with six apiece. Harris, Malik Manciel, Tyshun Render and Trae Philpots each had a sack, and Brooks had 2.5 tackles for loss to lead the team.

Offensively, Brent Stockstill finished 14-for-20 passing for 111 yards, three TDs and an interception, and he also lost a fumble. Lee had six catches for 60 yards and two scores, his first two TDs of the season, and graduate Gatlin Casey had two catches, 30 yards and a TD.

It wasn't the most impressive game for the MT offense, but its starting QB isn't worried moving forward.

"We'll be ok," said Brent Stockstill, who was hobbled all week with an ankle injury suffered against FIU. "We have a good offense, and we've proved that earlier this year. We'll just have to bounce back and have a good week, but all we care about is winning."

The Blue Raiders will try to keep pace in the C-USA standings next week on the road at Old Dominion. The Monarchs (1-6) were winless in the league heading into Saturday.

"We have to bring our leadership and our toughness," Rick Stockstill said. "Anytime you go on the road, it's all about toughness and blocking out all of the distractions. It'll be a lot of energy and excitement in that stadium, so we have to be ready to go."