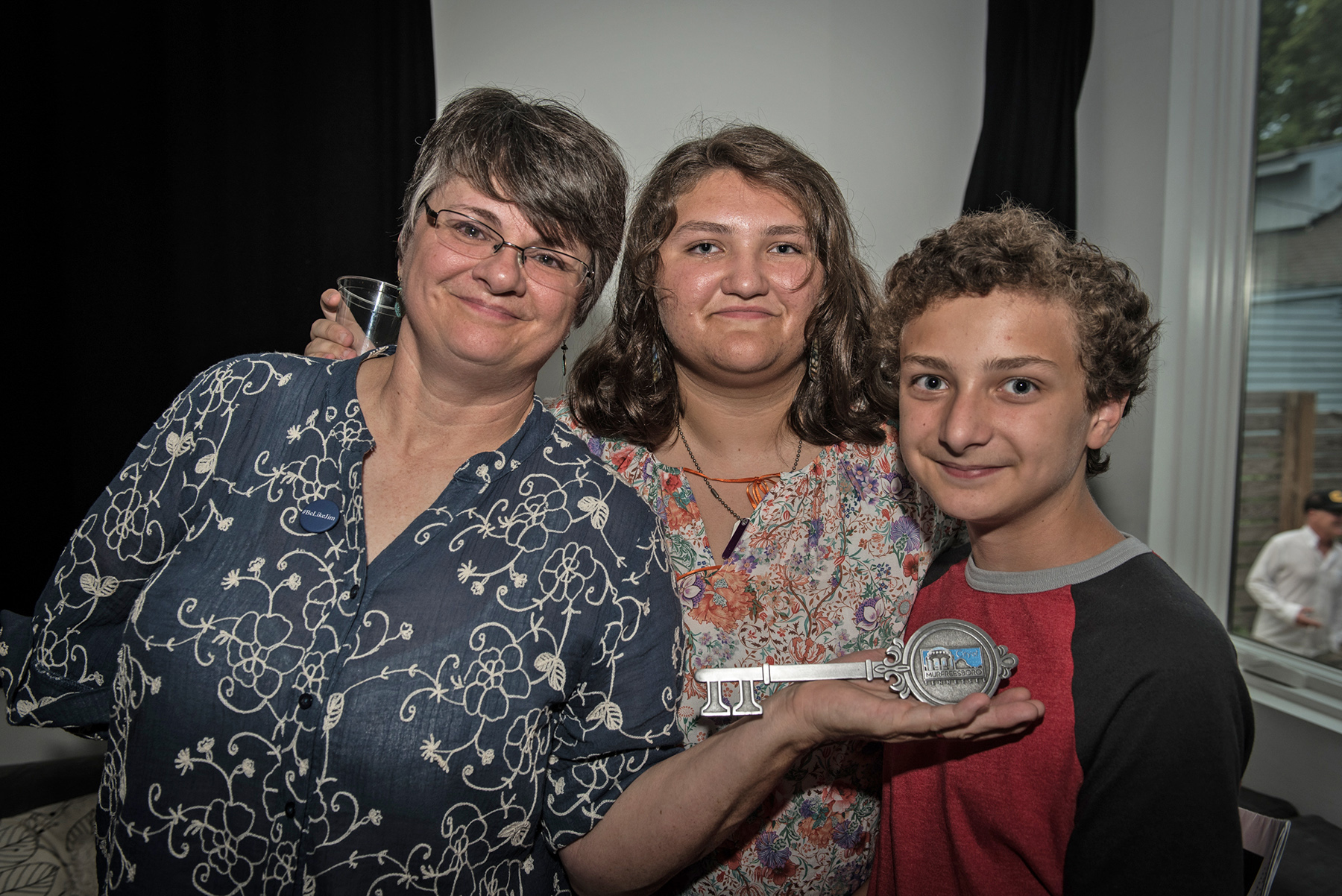 From left, Alicia Adkerson, Jim Ridley's widow and an MTSU alumna, poses with the Key to the City of Murfreesboro along with the couple's children, Kat and Jamie Ridley, during the Friday, July 14, celebration fundraiser in Nashville to benefit Ridley's scholarship fund through the MTSU College of Media and Entertainment. (Photo by Eric England/The Nashville Scene)

"Siren 2: A Special Evening of Film and Music Celebrating Jim Ridley" was held from 6 to 9 p.m. Friday at White Avenue Studio, located at 2517 White Ave. in Nashville's Melrose neighborhood.

The evening featured rare 16mm film footage, a musical performance by Kurt Wagner of Lambchop, a silent auction, and special guests discussing Ridley's impact on and legacy for the community. Among the special guests was Nashville Mayor Megan Barry.

All proceeds from the event went to the Jim Ridley Memorial Scholarship in the School of Journalism in MTSU's College of Media and Entertainment. With Friday's fundraising, the Ridley scholarship is now permanently endowed, said Abby White, CME development director and event emcee.

In a surprise presentation, Ridley's widow, Alicia Adkerson, was presented a key to the city of Murfreesboro by City Councilman Rick LaLance. Also in attendance were Ridley and Adkerson's young children, Katharine "Kat" Dillon Ridley and James A. "Jamie" Ridley VI.

Jim Ridley, 50, a Murfreesboro native who earned his MTSU journalism degree in 1989, was involved in the arts and his community from his youth, writing movie and book reviews for local newspapers by age 13. His talent led to a freelance film-reviewing job for the Nashville Scene and regular contributions to The Village Voice, L.A. Weekly, Variety and other publications.

The Scene brought Ridley on full-time in 1994, and he rose to the positions of senior editor and managing editor before he was named editor in 2009, earning national awards and using his platform most successfully throughout his career to urge community support for Nashville's historic Belcourt Theatre.

Ridley died April 8, 2016, after suddenly falling ill in his office at the Scene. The community quickly moved to support his family -- his wife and their young children; his brother, filmmaker Read Ridley, and their father, James "Jim" Ridley IV -- and immersed them in praise and thanks for his many kindnesses and years of service to Nashville and to journalism.

The Belcourt named its newly expanded lobby for Ridley when it reopened last July 22 and paid tribute to him with a subsequent special series of some of his favorite films, "Jewels and Jim: Ridley's Believe It or Not."

For more information about or to donate to the Jim Ridley Memorial Scholarship Fund, visit this site or contact Abby White, CME development director, at abby.white@mtsu.edu.