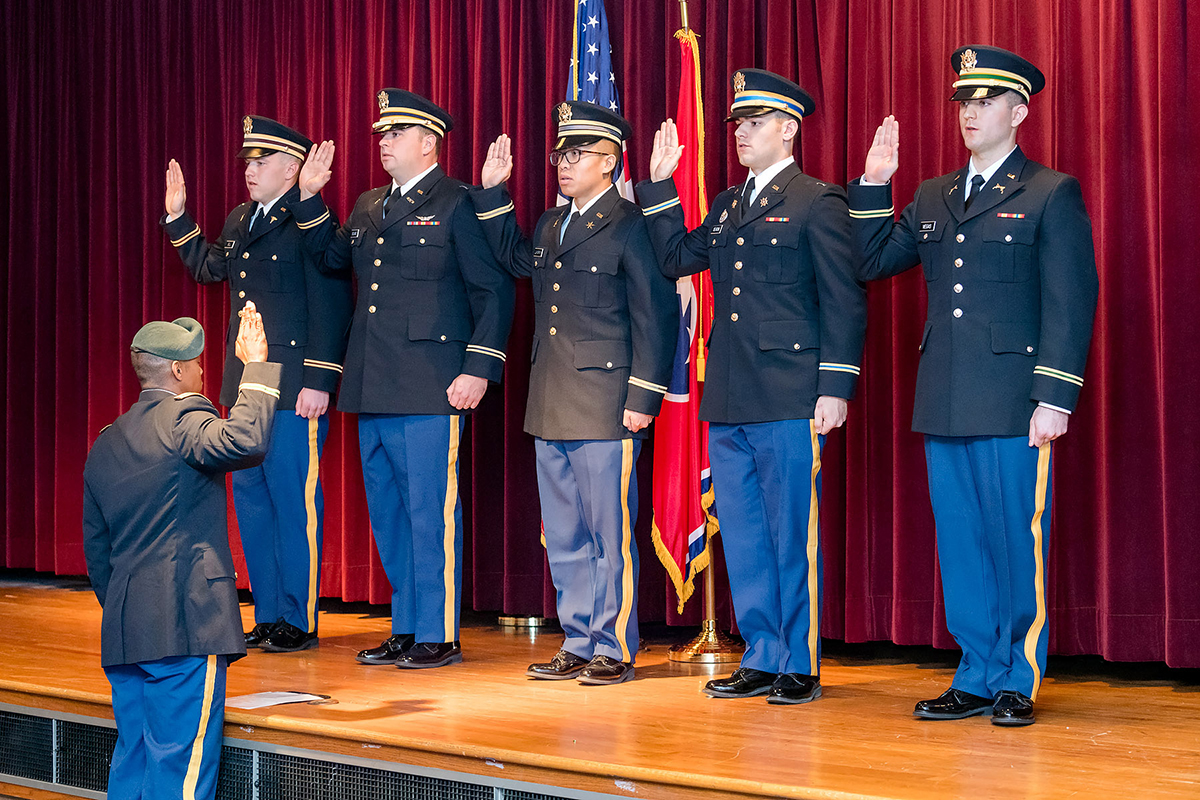 With family and friends in attendance, the five were commissioned as second lieutenants in the approximately 30-minute formal ceremony that is a tradition for the program.

The cadets, who graduated Saturday (Dec. 16), include:

• Joseph "Joe" Bell of Morristown, Tennessee. He earned a bachelor's degree in economics. His status will be active duty with the medical service corps branch.

• Richard Boland of Murfreesboro. He earned a Master of Science in Professional Science while majoring in geosciences. He will be active duty with the chemical corps branch.

• Randell Luangrath of Des Moines, Iowa. He received a bachelor's in business administration. He will be reserve forces duty with the Tennessee Army National Guard's cyber branch.

• Paul Seaton of Chapel Hill, Tennessee. He earned a B.B.A. in entrepreneurship. He will be active duty with the military intelligence branch.

• Parker Vegas of Cut Off, Louisiana. He earned a bachelor's degree in criminal justice. He will be reserve forces duty with the Tennessee Army National Guard's military police branch.

Speaking briefly after the ceremony to Davidson, who is deputy mayor for Rutherford County, Boland told him he will "always remember the three Cs."

"Character is something you have to work at," Davidson (Class of 1985) said. "It is not something you can simply pull out of a locker, a duffle bag or a rucksack (backpack). Character is a verb, demonstrated on a daily basis in what you do, how you do it and why you do it. ... Character can be lost in a matter of minutes or even seconds."

They will have to master guns, grenade launchers, tanks and other vehicles.

Davidson said commitment is "wisely using precious resources entrusted to us, ensuring our Army is well led and well prepared while caring for soldiers."

The Department of Military Science is one of 11 such programs in the College of Basic and Applied Sciences. Lt. Col. Jackie McDowell is chair of the department.