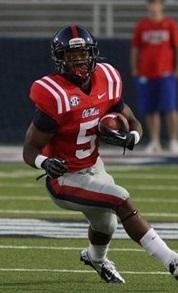 Middle Tennessee Head Coach Rick Stockstill announced today that former Blackman High School and Ole Miss running back I'Tavius Mathers will be joining the Blue Raider football program. Mathers will sit out the 2015 season due to NCAA transfer rules and be eligible to play in 2016.

Mathers, who will have one year of eligibility at MT, lettered three years for the Rebels as a backup running back. The former Blaze standout led Ole Miss in rushing as a sophomore with 563 yards and three touchdowns, then added 290 yards on the ground in 2014.

Mathers will begin classes at Middle Tennessee on Tuesday.