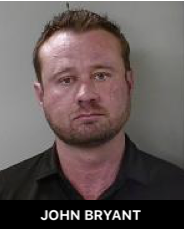 The owner of the now closed Skywalker Roofing is in jail after being served an eight-count sealed indictment handed down from the grand jury.

Bryant is set to be arraigned in Judge David Bragg's courtroom on Monday (May 16).

You may recall Bryant was seriously hurt and his wife Kori and daughter Olivia killed in the Good Friday 2009 tornado that ravaged Murfreesboro.

Skywalker Roofing has been closed since December of 2015. The company's website has been taken down and search engine results show it permanently closed.

According to the Better Business Bureau, the now closed Skywalker Roofing currently has a D-minus rating with two complaints in the last three years. There's also mention on the businesses rating page that on August 15th of 2014, an arrest warrant was issued against John Bryant for allegations of theft of property over 10-thousand dollars. A disclaimer on the BBB site says they report on known government actions that are relevant to the business's marketplace dealings with the public.