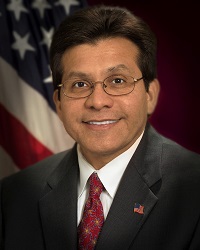 Gonzales, who is the new dean of the Belmont University School of Law, will speak beginning at 1 p.m. Sept. 25 in the Simmons Amphitheatre inside the Paul W. Martin Sr. Honors Building on the east side of campus.

Gonzales' talk is presented by MTSU's Department of Political Science and the University Honors College. A brief reception will follow the lecture in the same location.

Gonzales served as counsel to George W. Bush during his days as governor of Texas and then joined him in Washington, D.C., as the first Hispanic White House counsel, serving as U.S. attorney general from 2005 to 2007. He also served as the Texas secretary of state and as a justice on the Texas Supreme Court.

Gonzales joined the Nashville law firm of Waller Lansden in 2011 and has served as the Doyle Rogers Distinguished Chair of Law at the Belmont College of Law since moving to Tennessee. He was named to lead Belmont's law school this past June.

Gonzales, who earned his bachelor's degree with honors from Rice University and his law degree from Harvard, has also served as a visiting professor and minority/veteran recruitment consultant at Texas Tech University.

Gonzales is a native of Humble, Texas, and was one of eight children born to first-generation Mexican-American parents. Despite family hardships, Gonzales became an honors student and subsequently attended the U.S. Air Force Academy, where he continued his academic excellence. During his tenure as White House counsel, Gonzales played a key role in setting the legal foundations for the war on terror.

At Belmont, Gonzales has taught Constitutional Law, First Amendment, National Security Law and Separation of Powers. He also serves on the board of directors for the United Way of Metropolitan Nashville and the Community Foundation of Middle Tennessee and is an appointee of Tennessee Gov. Bill Haslam to the Governor's Commission for Judicial Appointments and the Governor's Management Fellows Executive Committee.

Gonzales was in town earlier this summer to speak to the Murfreesboro Rotary Club where he stated...