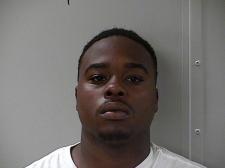 Several cars were shot in Murfreesboro this past Sunday morning at 3AM. The incident unfolded in the area of South University Street and Reid Avenue.

When Police arrived they observed bullet holes in cars and several shell casings in the street. The Criminal Investigations Unit was then called to the scene.

Several witnesses in a parked car told police they were in the area when a fight broke out. They observed a black male wearing a white shirt pullout a pistol and suggested the man started shooting. One witness told officers that she recognized the subject who shot her car as Marquion Cason.

Reports show that four cars had damage from bullets, allegedly fired by Cason.

Police caught up with Cason on East Clark Boulevard where he was stopped. The man was taken back to the scene where he was positively identified by witnesses, according to the official arrest report.

During a police interview it was documented, "He (Mr. Cason) advised that he fled the scene and was firing shots as he was running away down Reid Avenue. He also advised that he dropped his gun somewhere in the area, but wasn't sure where."

Cason, who is a convicted felon with a past that includes Aggravated Burglary, was arrested and charged with four counts of felony vandalism, three counts of aggravated assault and possession of a weapon by a felon.