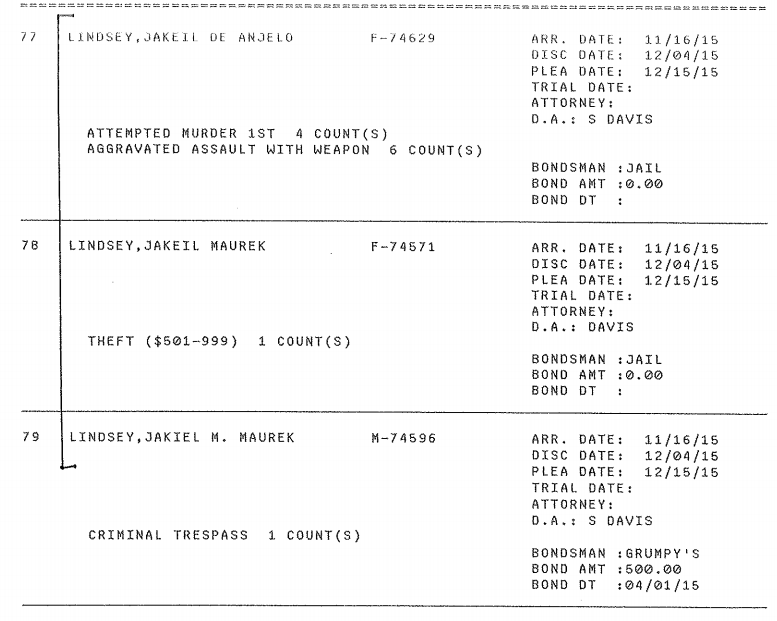 A man charged with four counts of "Attempted First Degree Murder" in Murfreesboro will appear in court for what is called a "Discovery Hearing" on December 4, 2015. A Discovery Hearing is a legal term used in a pre-trial procedure, it provides an exchange of information between parties that are involved in a legal proceeding.

The charges stem from an incident that occurred on April 26, 2015. Murfreesboro police officers responded to University Gables Apartments (2827 S. Rutherford Blvd.) to investigate the shooting of two individuals. When officers arrived on scene, they found 20-year old Dartavious Brittenum and 19-year old Travious Miller injured from gunshot wounds. Both were transported to Vanderbilt by LifeFlight due to the seriousness of their injuries. Both survived and have since been released from the hospital and are recovering from their injuries.

On April 30, 2015 Detective Larry Maples obtained arrest warrants on Jakeil Lindsey for two counts of Attempted First Degree Murder and two counts of Aggravated Assault with a Firearm. Those two charges later turned into four as more information was uncovered.

On May 5, 2015, Jakeil Lindsey (pictured below) was taken into custody by the Rutherford County Sheriff's Office Fugitive Squad. In addition to the shooting related charges, he was also served with eight warrants from the MTSU Police Department for charges of Burglary, Theft, and Fraud.