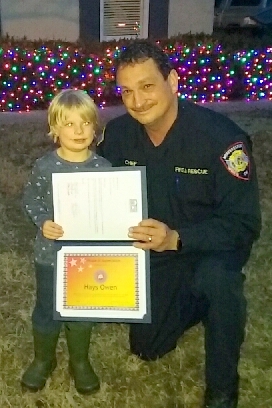 He may just be four years old, but Hayes Owen, son of David and Stacey Owen of Murfreesboro, had a BIG wish for Christmas.

Hayes asked family members to donate to his local fire department (Murfreesboro Fire Rescue) for his Christmas present. "We were sitting around discussing what we could do during Christmas to help out our community," said Stacey Owen. "Hayes absolutely loves firefighters and gets so excited whenever we pass a fire station or see a fire truck coming down the road. It didn't take him long to decide what we should do!"

MFRD started receiving donations in the mail around the holiday, but did not know why until finally one day, Ms. Joann Turner made it much clearer.

"Hayes Owen requested a donation to you for his Christmas present," Turner said in the letter attached with her donation. "I am so impressed by him showing the real meaning of Christmas."

Turner also asked that maybe Hayes could receive a special visit from the Firefighters in his neighborhood as a way of saying, "Thank you."

On December 28, the crew from Ladder 6 and Fire Rescue Chief Mark Foulks (driving the ladder truck himself) visited Hayes at home to thank him in person.

"How humbling it is that such a small child's Christmas wish could impact his community in a BIG way," said Foulks. "His selflessness is commendable, and we are honored to have such a fine, young man living in our city!"