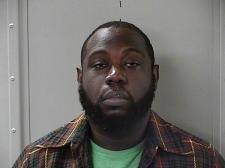 A 33-year old Macon, Georgia, man was arrested by Murfreesboro Police after a warrants check revealed he was a wanted man.

Officer David Ladouceur reports while conducting a routine patrol on South Church Street, he made contact with Tequan Daly.

The check revealed Daly was wanted for robbery, theft and false imprisonment. He was arrested and taken to the Rutherford County Jail. Bond was set at 16-thousand dollars.