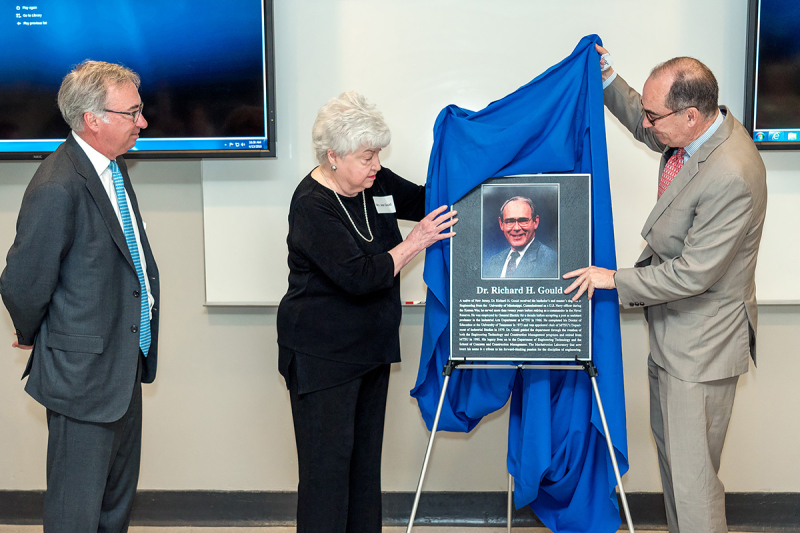 Jimmy Gould, left, watches as his mother, Jean, and brother, Jeff, unveil the plaque for the Dr. Richard H. Gould Mechatronics Laboratory in mid-April in a Wiser-Patten Science Hall classroom. The lab is located in Davis Science Building. Jean Gould gave a significant amount of money in her husband's memory. (MTSU photo by J. Intintoli)

Holding the actual clipping in The Tennessean from 2017, where the newspaper reported MTSU's Department of Engineering Technology needed a new building for its growing mechatronics engineering program, Jean Gould admitted publicly she "didn't even know anything about mechatronics."

"Mechatronics was a new term for me," she said. "But when I learned that it was a multidisciplinary field of engineering, whose graduates could go out into the workforce with the knowledge and skills that would benefit themselves and the world around them, I knew my husband would have thrown himself into supporting this project 100 percent."

Professor Emeritus Richard H. "Dick" Gould, who died April 10, 2012, spent 29 years at MTSU and was chair of industrial studies (later to be called Engineering Technology and Industrial Studies) from 1979 to 1995 when he retired. A year after his passing, Engineering Technology unveiled a new mechatronics program, which has grown to more than 300 students.

Jean Gould spoke to a gathering of more than 50 people attending the dedication of the Dr. Richard H. Gould Mechatronics Laboratory earlier this month.

With sons Jeff and Jimmy Gould in total agreement with their mother that their father would have supported mechatronics, Jean Gould wanted to give a significant amount of money for the lab, which is located in Davis Science Building.

The undisclosed gift will provide a robot and additional equipment, MTSU officials said.

College of Basic and Applied Sciences Dean Bud Fischer said the college is "so very grateful to Mrs. Gould for her gift."

"By equipping this lab for teaching and research in mechatronics, her gift has not only created a legacy for her husband, but has enabled MTSU to stay at the cutting edge of both technology and education," Fischer said.

Assistant professor Brian Slaboch, director of the mechatronics program, showed a video of the FANUC robotic system that will be in the lab.

"When you see it (video), think of the students who will use it," said Slaboch, adding he has "been inspired by Dr. Gould's story and his dedication and commitment."

Professor Emeritus Richard "Dick" Redditt provided comments on the life of his former colleague and department chair and introduced a video of alumnus and businessman Darrell Freeman paying honor to the Goulds and sharing how students will be impacted by the additional equipment.

Once engineering technology secures a building, the Gould Mechatronics Lab will be transferred there.

Rutherford County auto industry giants Bridgestone, with its mechatronics facility at its La Vergne, Tennessee, education center, and Nissan in Smyrna, Tennessee, are among worldwide and local partners in the program.

MTSU has more than 310 combined undergraduate and graduate programs.