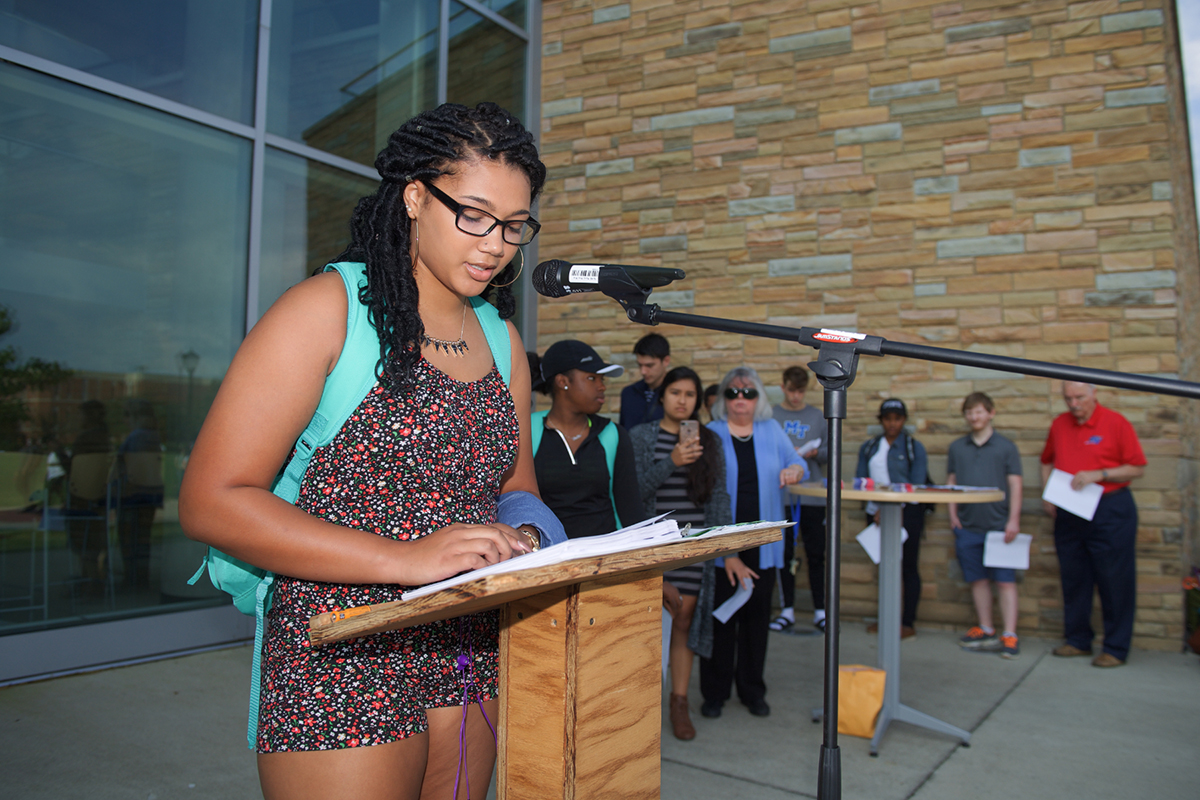 MTSU freshman Michaela Moore of East Ridge, Tenn., reads the U.S. Constitution outside the Science Building as part of the university's Constitution Day celebration Wednesday, Sept. 20. Students, faculty, staff, visitors and other volunteers from MTSU's academic colleges read the 230-year-old document at sites across campus during the event, coordinated by the MTSU chapter of the American Democracy Project. (MTSU photo by Andy Heidt)

Five eminent jurists illuminated the foundation of our nation's laws and the role of judges in interpreting those laws as part of MTSU's 2017 Constitution Day festivities.

Under the title "The Constitutional Role of an Independent Judiciary in a Democracy," the senior and retired federal and state appellate judges and justices gathered for a panel discussion inside the James Union Building's Tennessee Room where they examined a wide range of topics both in the abstract and in the context of current events.

"I believe that the Constitution is a living document, that it has to adjust as times adjust," said White, now E.E. Overton Distinguished Professor of Law at the University of Tennessee College of Law.

Another former state Supreme Court justice, Martha Craig Daughtrey, noted that emerging democracies look to the American judiciary as a model, although they do not seek to replicate the American executive and legislative models.

"There is a widespread universal respect for the courts, and it goes back to the independence of the courts," said Daughtrey, who is now senior judge on the U.S. Court of Appeals, Sixth Circuit.

Without mentioning President Donald Trump by name, Daughtrey decried what she perceived to be a recent "disrespect for the judicial branch" on the part of the executive.

"It is hard to imagine how much damage that does among people looking at the court system," she said.

Belmont College School of Law Dean Alberto Gonzales, who was U.S. Attorney General during President George W. Bush's administration, contended that judges should be subject to criticism. However, he asserted that the criticism should be delivered respectfully.

"Sometimes judges get it wrong," said Gonzales, a former Texas Supreme Court justice. "We wouldn't have courts of appeals and the Supreme Court if trial court judges always got it right ... It's how you do it."

Curtis Collier, senior judge for the U.S. District Court of the Eastern District of Tennessee, was asked about the role of the judiciary in the thorny issue of immigration.

"Immigration is one of those areas where all three branches have a very strong interest and those interests will compete and conflict," said Collier. "And, if there is not a resolution politically, it, ultimately, will end up in the hands of the judiciary."

Former state Supreme Court Chief Justice Gary Wade likened the judiciary to a "referee" that settles disputes between the executive and legislative branches.

"When called upon to make a call, whether it's an executive order or a piece of legislation that might conflict with Constitutional principles, the court makes that call," said Wade, who now is vice president and dean of the Duncan School of Law at Lincoln Memorial University in upper East Tennessee.

Keel Hunt, author and columnist for The Tennessean, moderated the panel discussion, which included an audience question-and-answer session.

The discussion, which was sponsored by the MTSU chapter of the American Democracy Project, capped a day of public readings of sections of the Constitution at various locations around campus, as well as a voter registration drive.

"We want civic learning to be pervasive, not partial, across our university, and central, not peripheral, to our identity," said American Democracy Project coordinator Mary Evins in describing the importance of the campus-wide celebration.

MTSU has celebrated the 1787 signing of the Constitution for the past 12 years. Because this year's actual Constitution Day was Sunday, Sept. 17, the celebration was scheduled for Sept. 20.