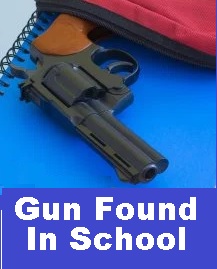 A weapon was found at Blackman Middle School on Thursday (3/22/2018) morning.

Rutherford County Schools Communications Coordinator James Evans said, "Around 11:00 o'clock Thursday morning the school administration received information that a student possessed a weapon on campus. The administration and School Resource Officer questioned the suspected student and his belongings were searched. A handgun was found in his backpack inside his locker."

The eighth-grade male student has been arrested by the School Resource Officer and has been expelled from school under the district's Zero Tolerance policy.

It has been confirmed that the gun was unloaded although ammunition was also recovered from the bag.

Evans noted, "I know these situations frighten parents, but we want to thank you and your students for continuing to be vigilant and for reporting any suspicious activity you see. Doing so is one of the best ways to assist us with maintaining safe campuses."

Again, an 8th grade student was arrested and then expelled from Blackman Middle School on Thursday morning after a gun was found in his backpack.