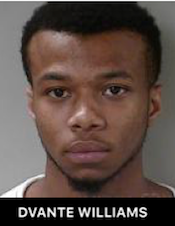 An 18-year old Old Lascassas Pike man is in jail after being arrested on drug charges and for having a gun while in possession of drugs.

The officer reports being called to the home because of a drug complaint called in. When he arrived and asked Williams for his I-D, he stated it was inside the home. Officer Bush escorted Williams inside and saw marijuana inside a coffee cup in the floor.

The officer then asked if there were any firearms inside the home, which a female subject who was outside of the home said there was a 9mm handgun in a storage closet. More marijuana, wrapped in individual bags, were also found there by Officer Bush.

Upon further investigation, another handgun was found upstairs. Williams is charged with felony possession of a schedule four drug and possession of a firearm during the commission of a felony. He will be in General Sessions Court on August 30th. Bond was set at eight-thousand dollars.