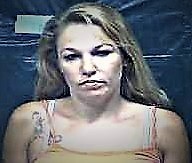 (SHELBYVILLE) A 39-year old woman, described as homeless, has been reported as missing from neighboring Shelbyville for over a week.

Misty Pannett's family reported her missing last Friday (12/20/2019). They told detectives with the Shelbyville Police Department that she was last seen in that community's Shoma Park area with a female named either Shanna or Shaunna.

Police did a technology check-up and discovered that Misty Pannett has not received any cell phone or social media contacts for the past several weeks.

The 39-year old woman has now officially been entered into the NCIC (National Crime Information Center).