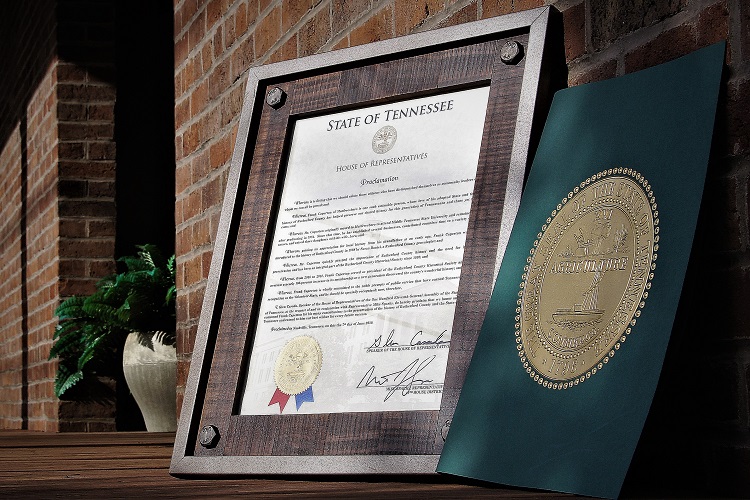 State Representative Mike Sparks (R-Smyrna) recognized Frank Caperton of Murfreesboro with a House Proclamation for his outstanding work as president of the Rutherford County Historical Society and his leadership in the local community.

Caperton moved to Murfreesboro, Tennessee to attend Middle Tennessee State University in 1984 and has remained since graduating. Since that time, he has established several businesses, contributed countless time to a variety of causes, and raised three daughters with his wife, Lora.

Caperton is the past president of the Rutherford County Historical Society having served as president from 2016 until 2018. During his tenure as president, he oversaw a nearly 100 percent increase in its membership - helping a new generation value our local history.

"I am honored to recognize Frank Caperton for the great work he has done to preserve Rutherford County for this generation and those to come," said Representative Sparks. "I am proud of the great work he has done for our community, and I look forward to working with him to ensure our state remains the best place to live, retire, and raise a family."

Murfreesboro City Council member and Rutherford County Historical Society Board member Eddie Smotherman said, "Frank has been a great cheerleader promoting the positives about our great city. He has promoted local businesses, our parks system, our history and has been involved in so many civic organizations that I will not even try to name them all. Frank is the perfect example of someone coming to our community and only making it better. I can't say how delighted I am that Frank is receiving recognition for all he has done."

"Rutherford County owes a debt of gratitude to Mr. Caperton," said Smyrna Historian Marty Luffman. "His energy and volunteer work is not just to the Rutherford County Historical Department as he serves on the Stones River Battlefield Board, Lions Club, Rotary Club, and Salvation Army, just to name a few."

Mike Sparks represents House District 49. Representative Sparks is the chairman of the Consumer Subcommittee. He also serves on the Insurance Committee, Consumer and Human Resources Committee, Naming, Designating, and Private Acts Committee, and the Property and Casualty Subcommittee.