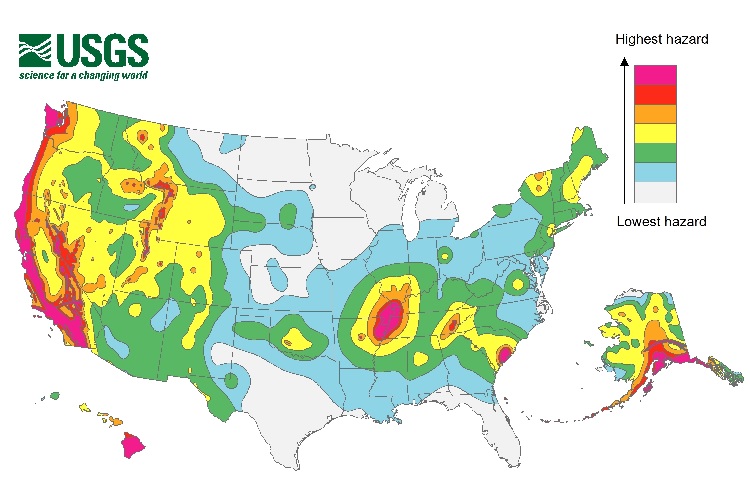 Notice on this USGS map that 2 areas of Tennessee are in the "Highest Hazard" areas. One is in East Tennessee, where these quakes were reported. The other is the New Madrid fault in West Tennessee.

Two earthquakes shook parts of East Tennessee Wednesday (12/12/2018) morning. They occurred a half-hour apart and were 30-miles distance from each other.

Readings from the US Geological Survey (USGS) shows the first rumble was recorded 9-miles from Spring City, Tennessee at 3:14AM Eastern Time. It was a 4.4 magnitude. Then thirteen minutes later, in the same area, a 3.0 quake was measured at 3:27AM Eastern Time. Those were both early Wednesday morning.

The USGS notes that 4-days earlier (12/8/2018) that a seismc reading of 2.7 was recorded 8-miles from Sweetwater, Tennessee. By the way, Spring City and Sweetwater are about 30-miles apart.

The USGS reports that since 1973, there have only been six earthquakes with a greater than 4.0 reading.

The Wednesday shake was the second largest on record in East Tennessee over the past 45-years. Allegedly quakes of that strength are strong enough to create structural damage.

By the way, the stongest one was measured 4.7 in 1973 near Maryville, TN. In checking mileage, Maryville is 36-miles from Sweetwater. It's obvious, all three quake areas are near each other.