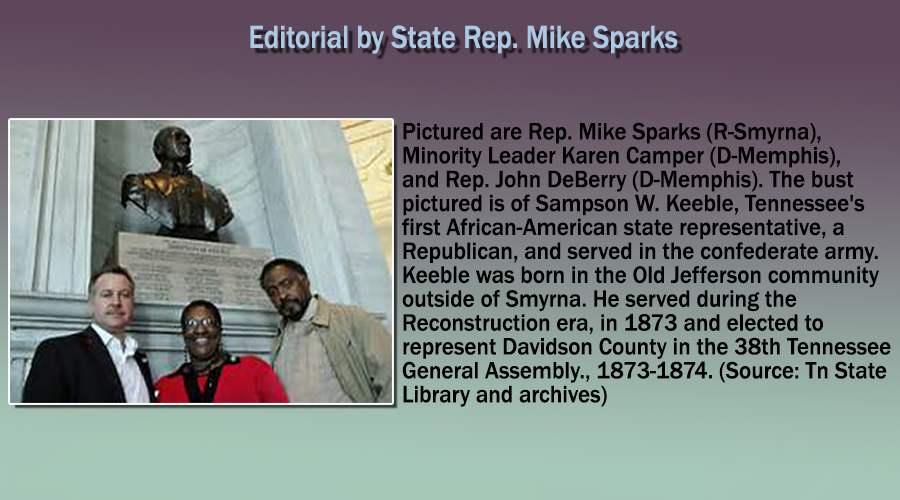 Submitted Editorial by State Rep. Mike Sparks of Smyrna, TN: Political campaigns in America have always been a contact sport—often times, they get downright nasty. The most egregious display of political betrayal I have witnessed in my lifetime is what happened to Rep. John DeBerry of Memphis. Back in April, the Tennessee Democratic Executive Committee voted to take DeBerry off the ballot. They met in an online meeting a few days after the April 2 candidate filing deadline.

In an interview with the Memphis Flyer published April 15, Deberry said he had no prior notice about the committee’s intention or vote. He was “ambushed and blindsided” by the action taken against him, he told the newspaper.

Deberry’s Republican and Democratic colleagues in the General Assembly expressed disappointment and outrage by the Democratic Party’s actions.

“The people of his district have sent DeBerry to Nashville to be their voice 13 times. If someone believes their voices and values are better fits for a district, I encourage them to file for office and make their argument to the voters,” said Rep. Karen Camper, the Democratic House Minority Leader, to the Memphis Flyer in the April 15 article.

Rep. Joe Towns, D-Memphis, also expressed his anger, calling the move against DeBerry, “A draconian attempt to perceive how a ‘lesser than’ people should behave or vote,” and “this racially motivated and bullying attempt will not be tolerated.”

Other colleagues— including Rep. G.A. Hardaway, D-Memphis,  and Sen. Raumesh Akbari, D-Memphis — were also quick to defend DeBerry, who wasn’t the only person removed from the ballot. In fact, four other candidates whose credentials were challenged were also deemed ineligible to run under the Democratic party label. So much for being the big tent or catch-all party.

Giving his annual report at his presidential library in Atlanta in 2018, former President Jimmy Carter in 2018 warned his party, “Don’t go too far to the left. Independents need to know they can invest their vote in the Democratic Party.”

DeBerry, a popular and extremely influential 26-year lawmaker and pastor is known for working across the aisle and getting things accomplished for his district. He was simply kicked off the ballot and the voice of the people was undoubtedly silenced.

As a young boy, he marched with civil rights icon Dr. Martin Luther King Jr. In many ways, his life embodies the American Dream. However, what has happened to DeBerry is nothing more than modern day persecution.

I’ve often called Rep. DeBerry, the ‘E.F. Hutton’ of the Tennessee General Assembly. Much like the old commercial, “When E.F. Hutton talks, people listen.” When Rep. DeBerry talks everyone — including our governor — listens. DeBerry knows his district, and he sees firsthand the brokenness of families, high fatherless rates, drug addiction, alcoholism, homelessness, lack of opportunities and other issues affecting urban areas.

Despite our many differences from Mountain City to Memphis, we are very similar in many ways, and Tennessee needs Rep. DeBerry.  He brings a wealth of knowledge, wisdom, and experience to the Capitol, which has helped create good public policy. I will argue that DeBerry has more influence than the entire Tennessee Democratic Party combined. The completely absurd effort to remove him from the ballot is the equivalent of taking Peyton Manning off the field during the Super Bowl.

The good news is we recently passed legislation with overwhelming support by Republican and Democrat support enabling him to get back on the ballot, and he will seek a 14th term this fall as an independent candidate.

Recently, I joined a few representatives for a prayer caucus phone call. State Sen. Janice Bowling asked John, “How are you holding up?” After a brief pause, John became emotional and replied, “I just have to put it in the good Lord’s hands, and I will be alright.”

I later called DeBerry to offer my encouragement and reminded him of Dr. King’s ‘Letter from a Birmingham jail’ and the pain Dr. King must have felt sitting in that jail cell. During our conversation, I reminded him of this quote, “In the end, we will remember not the words of our enemies, but the silence of our friends.”

Rep. DeBerry, please know that you have touched thousands of lives in cities and towns across Tennessee, and all of your friends are totally behind you. I know you will be back in Nashville serving your district again next year, and I look forward to continuing to partner with you for the betterment of all Tennesseans. The voice of the people — not a select few — will once again prevail. God bless you, and it is an incredible honor to serve with you in our General Assembly.

Auto Emission Testing Has Ended in Rutherford County and 4-Other Counties
WGNS is joined by a State Senator and local State Representatives that represent Rutherford County - And you will hear a special thank you to WGNS for 75-years of broadcast history
FRIDAY: Tammy Dickenson