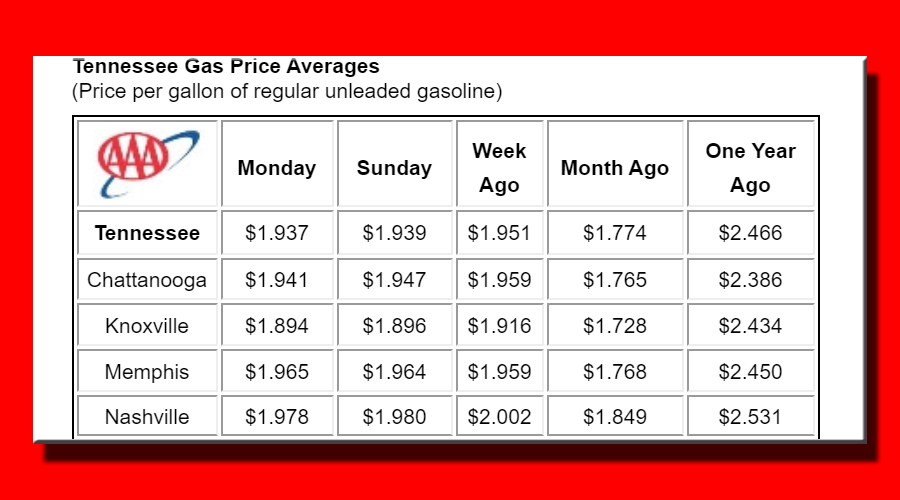 For the first time in eight weeks, The Tennessee gas price average declined - nearly two cents cheaper compared to last week. The Tennessee Gas Price average is now $1.94 which is 16 cents more than one month ago and nearly 51 cents less than one year ago.

"Tennessee drivers saw the cheapest Independence Day gas prices in 16 years over the weekend, " said Megan Cooper, spokesperson, AAA - The Auto Club Group. "The state average on July 4 was $1.94 - 52 cents less than one year ago and the cheapest since 2004."

The national gas price average increased just one cent to $2.18 on the week despite a dip in U.S. demand for gasoline and gasoline stocks increasing by 1 million bbl. The slight drop in demand – 47,000 b/d - amid the increase in stocks comes as many states report increases in COVID-19 cases, potentially causing Americans to reconsider outings. However, for motorists who hit the road for the Independence Day holiday, gas prices were a welcome sight.

At the end of Friday’s formal trading session, WTI increased by 83 cents to settle at $40.65 per barrel. Domestic crude prices increased after EIA’s weekly report revealed that total domestic crude inventories fell by 7.2 million bbl to 533.5 million bbl. Decreasing crude stocks could mean that crude production is meeting demand as it continues to recover amid new coronavirus outbreaks around the world, which could suppress global crude demand during the second half of 2020.