Adoption for LGBTQ Couples and Abortion in Tennessee: Hot Topics Among 2 Groups 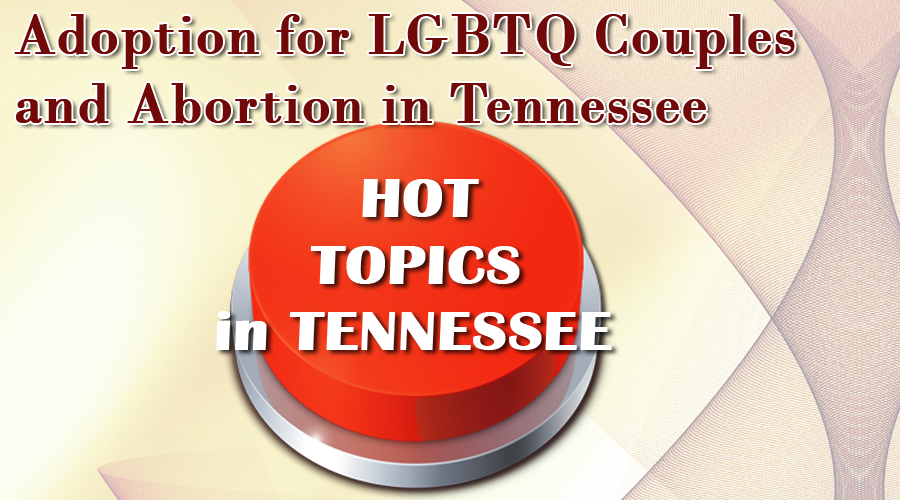 The group released the following statement:

"Two tough reproductive freedom losses, a law that allows for discrimination against LGBTQ parents in adoption and an extreme abortion ban, bookended the year, but some hard fought victories are cause for celebration. 2020 began with the passage of a bill allowing adoption and foster care agencies to discriminate against prospective LGBTQ parents. And attacks on LGBTQ Tennesseans continued with the introduction of bills targeting trans youth’s access to healthcare and school sports teams, bills about library censorship, and continued attacks on marriage equality. Fortunately, partners such as Tennessee Equality Project (TEP), ACLU-TN, and others were able to successfully fight back against these attacks. Our partner, A Better Balance, was successful in making Tennessee the 30th state to pass a Pregnant Workers Fairness Act, which provides protections for pregnant workers and a cause of action for workers whose rights are violated." - Healthy and Free Tennessee

In regards to the abortion ban that was
mentioned by Healthy & Free Tennessee,
the ACLU sent out the following release:

“This is a critical win for people in Tennessee who will not lose access to their constitutional right to abortion,” said Anjali Dalal, senior staff attorney at the ACLU Reproductive Freedom Project. “But we cannot lose sight of the big picture: that it took a court order to stop these politicians from pursuing a ruthless anti-abortion agenda in the middle of a pandemic, passing a ban that would disproportionately harm Black and brown people. We would urge Tennessee’s elected officials to abandon this destructive, shameful effort and return to the job they were hired for: serving their constituents.”

“Today’s important decision protects Tennesseans’ ability to access the medical care they need, including abortion. Especially in the midst of a global health crisis, lawmakers should realize that their continued attacks on access to abortion are particularly harmful to those struggling financially and those who already face significant barriers to health care – including people of color and people who live in rural areas,” said Hedy Weinberg, executive director, ACLU of Tennessee. “It’s past time for the politicians in our state get the message that they cannot insert themselves in someone else’s personal, private decision to end their pregnancy. We will continue to stand with our partners and fight back against politicians’ attacks on constitutionally-protected abortion care.”

“Banning abortion is blatantly unconstitutional, and the lawmakers who passed this law are well aware,” said Jessica Sklarsky, senior staff attorney at the Center for Reproductive Rights. “It is unconscionable that — in the middle of a public health crisis and a national reckoning on systemic racism — lawmakers are focused on trying to eliminate access to abortion. Abortion is an essential health service, and this law clearly violates the constitutional rights of patients and disproportionately harms communities of color. Tennessee should stop attacking reproductive healthcare and instead work to implement policies that will help marginalized communities. This law does the exact opposite.”

“This is a victory for patients in Tennessee, but the fight is far from over. This sweeping abortion ban is part of a multi-layered effort to target people who already face systemic barriers to care because of racist and discriminatory policies,” said Ashley Coffield, president & CEO, Planned Parenthood Tennessee and North Mississippi. “If the law sounds familiar, it’s because Gov. Lee already tried banning abortion earlier this year using fear around the pandemic as an excuse to carry out his dangerous political agenda. As we continue to fight for all of our patients, we’re glad that today’s ruling will allow Tennesseans to continue to seek the health care they choose in their home state.”

Tennessee has several additional abortion restrictions on the books, including a ban on the use of telehealth for medication abortion; a mandatory 48-hour waiting period (which includes a requirement that forces patients to delay care by adding a medically unnecessary trip to the clinic to receive state-mandated information); limits on when state and public insurance can cover abortion services; and a requirement that minors obtain parental consent. The Center for Reproductive Rights and Planned Parenthood are litigating another case in the state challenging the 48-hour waiting period.

Just three months ago, Gov. Lee attempted to ban abortion procedures during the onset of the COVID-19 pandemic by labeling abortion care as non-essential, despite opposition from leading national medical groups. In April, that attempt was blocked in court after a lawsuit was filed by the same organizations filing today’s case.