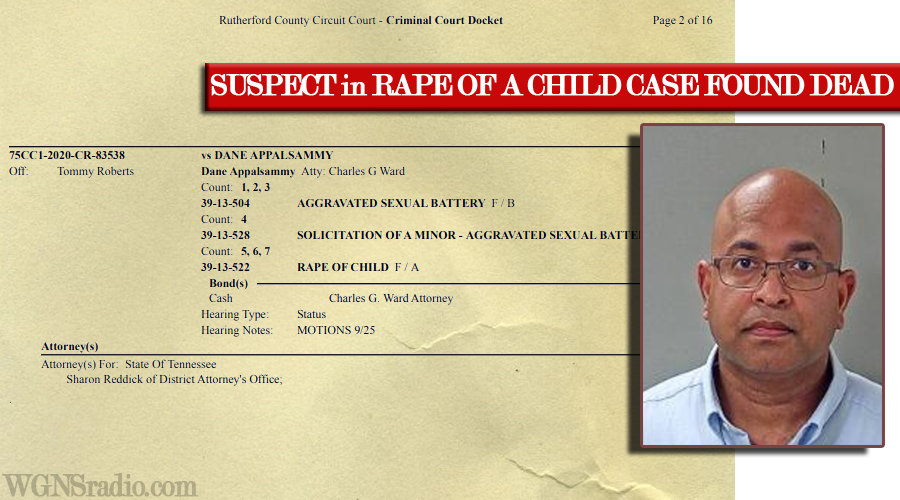 A suspect in a Murfreesboro child rape case has been found dead in Orange Beach, Alabama.

Dane Appalsammy was found dead outside of a resort hotel in Orange Beach on Sunday morning. A police report documented what could indicate Appalsammy fell or jumped from a hotel room balcony. A guest who was on a lower floor of the hotel said they heard a loud noise outside of their room. The guest quickly went to their second floor balcony and looked down, which is when they saw a man in the bushes and quickly called the front desk. 52-Year-old Appalsammy was a registered guest and was staying in a room on the 11th floor of the Perdido Beach Blvd. resort.

In Murfreesboro, Appalsammy was the focus of a 2020 investigation by the Special Victims Unit. An arrest report filed by now retired SVU Detective Tommy Roberts, showed that a February Department of Children Services referral led police to open that investigation into Appalsammy.

Looking back, Detective Roberts wrote, "[The] Investigation showed that some of the sex abuse involved a [child], approximately 9 years of age."

The former Middle Tennessee Electric Vice President of Information Systems was indicted shortly after DCS contacted Murfreesboro Police. The June 2020 indictment charged Appalsammy with 3 counts of Aggravated Sexual Battery, Solicitation of a Minor and 3 counts of Rape of a Child. He was taken into custody on June 22, 2020 and bonded out the very same day.

Appalsammy was scheduled to appear in a Rutherford County Courtroom this Friday (4/16/21). At that point, a trial would have been scheduled.