UPDATE: Person in Wheelchair Hit by Truck on N.W. Broad

A 54-year-old man is recovering after being hit in his wheelchair by a driver who failed to yield the right-of-way on Monday.  The victim was heading north on NW Broad Street and attempted cross Brinkley Ave. when the driver turned right and ran him over around 4:05 p.m.

The man’s wheelchair was pinned underneath the truck.  The victim has a broken leg and is in stable condition at the hospital.  The driver of the truck was cited for failure to yield the right-of-way.

(MURFREESBORO) -- Murfreesboro Police report a person in a wheelchair was hit by a truck Monday (7-12-21) afternoon.

It occurred shortly after 4pm and traffic was re-routed onto Brinkley Drive as officers investigated for a time, but has been re-opened.

Public Information Officer Larry Flowers reports the person in the wheelchair was attempting to cross the road when struck.

The wheelchair was lodged underneath the truck. The victim was taken to hospital. No word on his condition. The accident is under investigation. 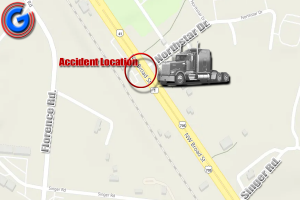