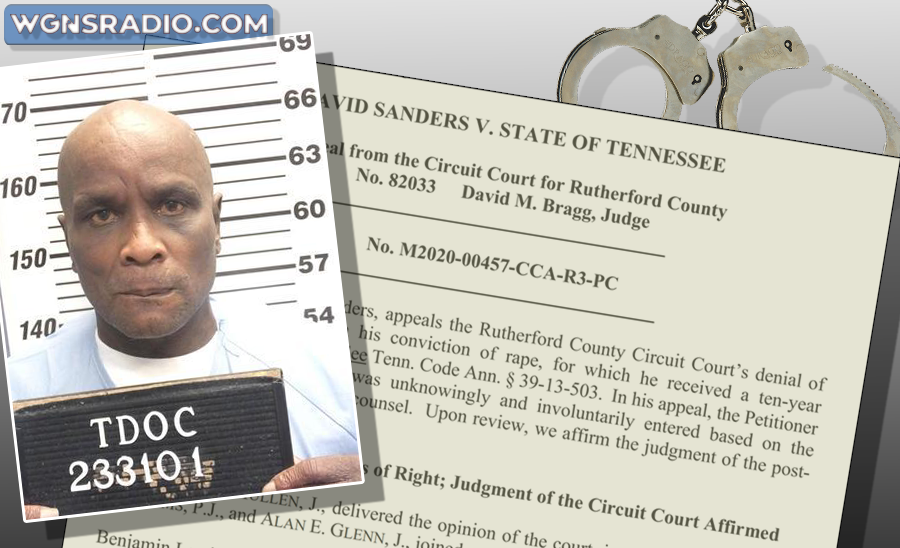 Filed on July 13, 2021: A man convicted of rape in Rutherford County has asked for an appeal in his case, suggesting that his guilty plea was made unknowingly or involuntarily, based on the ineffective assistance of trial counsel.

In 2016, Sanders reportedly went to the Nashville home of his co-defendant and watched him engage in multiple sexual acts to a 15-year old while two other minor children were present. Sanders, who was 58-years-of-age at the time, then engaged in a sexual act without the victims consent, according to court documents filed in the courtroom of Judge David Bragg in Rutherford County.

One year later, Sanders negotiated a plea agreement to one count of rape that carried a sentence of ten-years’ imprisonment and dismissal of the remaining counts of the indictment. The plea agreement was subject to Sanders testifying truthfully at the trial of his co-defendant -- failure to do so would result in setting aside the plea agreement.

Shortly after the trial came to a close and Sanders became familiar with his new environment, he filed an appeal with the court of criminal appeals at Nashville. In the appeal, he suggested that he thought his guilty plea came with the sentence of only probation, not prison time.

Sanders filed the following letter with the courts:

I thought I was on a [split] sentence to come out on probation. Can you please explain this to me? Cause in the special conditions it states: Defendant is to testify truthfully [at] the [trial] of his co-defendant, failure to do so shall result in the set aside of this plea agreement as to the disposition of this count and the remaining counts of the indictment all of which [are] to be dismissed. Can you explain this to me, [‘]cause I was under the impression that I was coming out on probation.

A post-conviction hearing was held on February 27, 2020, during which Sanders and trial counsel testified. Sanders again stated he believed his rape conviction would be dismissed after he testified against his co-defendant.

The end result of the case going before the appeals court did not end in Sanders favor. The courts responded, "the Petitioner is not entitled to relief.”

Sanders, who previously lived in the Rocky Hill Road area of Lascassas, has had other run-in's with the law for rape. The Tennessee Sex Offender Registry shows that the previous rape conviction for Sanders occurred in 1993.

The order was filed and confirmed by the Tennessee Supreme Court on July 13, 2021.