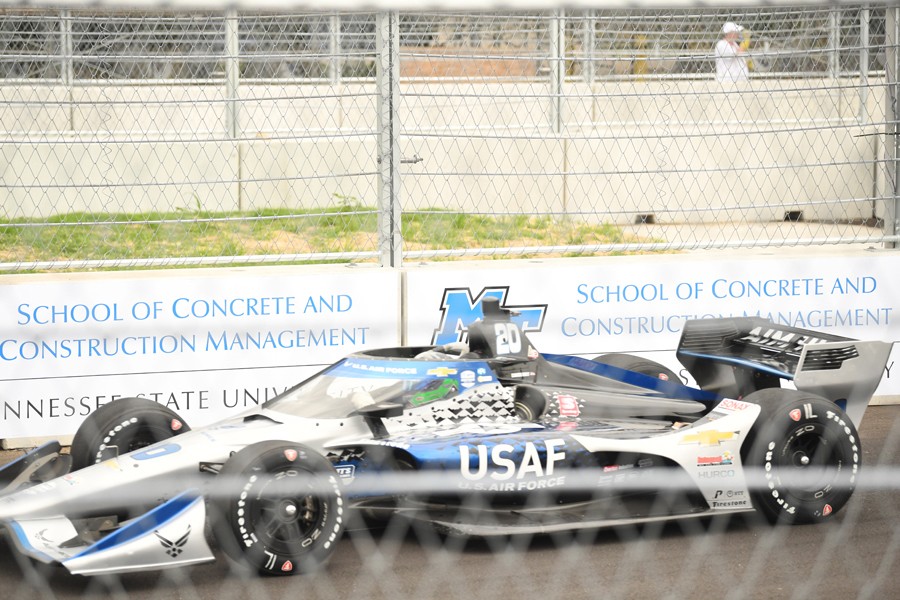 An IndyCar driver zips past MTSU’s School of Concrete and Construction Management signage affixed to the race barrier wall during practice Friday, Aug. 6, 2021, at the Big Machine Music City Grand Prix in Nashville, Tenn. MTSU concrete students helped research and test an environmentally friendly concrete mixture for both a barrier wall and pit lane for the race. (MTSU photo by James Cessna)

True Blue seemed to be at every turn Friday, as Middle Tennessee State University’s programs for concrete and construction management, veterans service, Army ROTC and the alumni association were showcased during the first day of the Big Machine Music City Grand Prix.

MTSU’s School of Concrete and Construction Management and the Charlie and Hazel Daniels Veterans and Military Family Center shared prime real estate near the Prix’s main stage in a booth hosted by Somero Enterprises, a supporter of the concrete program, and CIM Patrons, an organization supporting the university’s concrete industry management program (four other universities throughout the nation have their own CIM Patrons).

Through a partnership signed last fall by Provost Mark Byrnes and MTSU alumnus and Prix CEO Matt Crews, students helped research and test an environmentally friendly concrete mixture for both a barrier wall and pit lane.

Friday’s practice laps were the first time cars took to the track in a formal setting. Branding from the university’s School of Concrete and Construction Management and “I am True Blue” were visible at one of the turns near Nissan Stadium.

“President McPhee and I are proud to report to you that the legacy of service to veterans begun by Charlie Daniels lives on at the center that bears his name at Middle Tennessee State University,” Huber told the crowd.

“The Daniels Center is the largest and most comprehensive facility serving veterans of its kind in higher education. And we stand ready as a resource to all veterans, regardless of whether they are affiliated with the university.”

“All of us here tonight from MTSU are the beneficiaries of the generous spirit and support of two patriots,” Huber said, referencing Crews and former MTSU student Chuck McDowell, CEO of concert sponsor Wesley Financial Group.

Hawks, 18, of Mt. Juliet, Tennessee, is a May 2021 graduate of Smyrna High School. He will be entering MTSU as a freshman this fall and plans to study criminal justice administration.

“A military officer is a lifelong dream, plus being in college,” Hawks said. “This (scholarship opportunity) is setting my dreams up almost perfectly. … The day I learned I received it was a very, very good day. My grandfather (Marvin Mitchell of Greensboro, North Carolina) told me stories about being in the Navy. It made me want to follow in his footsteps. But instead of the Navy, I’m going into the Army.”

Fancher, 19, of Jackson, Tennessee, is a May 2020 graduate of Madison Academic Magnet School. He will be entering MTSU this fall to study horse science. He has already enlisted in the Army Reserve and is a member of the 449th Military Police Company out of Nashville, where he is a medic, but eventually wants to pursue being a chaplain or assistant chaplain.

“This has definitely been very gratifying,” Fancher said. “It’s a nice feeling for all of the hard work. This is a great opportunity. I’m excited to work within the (ROTC) program and get involved with MTSU. … This has kind of been a long process, but it has always been the goal, coming back out of the Army (and starting college).”