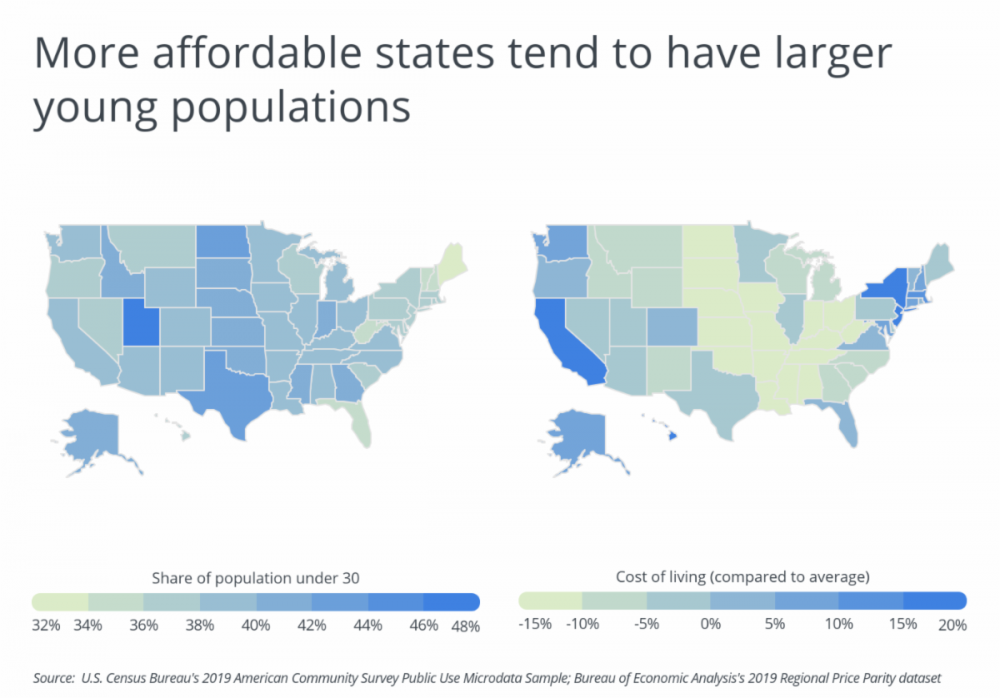 Less likely to be tied down by family and mortgages, young people tend to be more mobile than their older counterparts. Cheaper cities where young people can afford to rent or own a home are especially attractive to those who may still be saddled with student loans or are just starting out in their careers. Nationally, people under age 30 account for about 38% of the population, according to data from the U.S. Census Bureau. While the U.S. population is aging as a whole, and many cities are grappling with the effects of having stagnant or declining young populations, some more affordable cities and states have become especially popular among younger age groups.

The initial releases of the 2020 Decennial Census confirmed several important demographic trends that present growing challenges for U.S. policymakers. These trends include reduced geographic mobility, an unprecedented decline in population growth, and a rapidly aging society. In 2000, over 42% of the U.S. population was under 30. By 2020, that figure had dropped to slightly over 38%. Conversely, Americans over 65 accounted for 12.4% of the population in 2000, but now represent nearly 17% of total. One major contributing factor is that the U.S. fertility rate has dropped for six consecutive years, and the number of births in 2020 was at the lowest level since 1979.

The effects of these changes will have long-lasting consequences throughout the country. According to an analysis by the Brookings Institute, it is projected that all states and metropolitan areas will continue to experience growth in their populations over 55. This will lead to rising healthcare costs and declining tax revenues, among other challenges. However, for younger age groups—with declining population shares nationally—it will largely be migration that will determine which locations experience gains or losses. And according to the National Association of Realtors, affordability is more important to under-30-year-olds than any other age cohort.

Recent Census data shows consistency with these trends—namely, that locations with below-average living costs tend to attract more young people. At the state level, Utah and Texas have the largest young populations, where 48.2% and 42.8% of the population is under 30, respectively. Both of these states offer costs of living that are 3.5% lower than average. Texas, in particular, stands out as being among the top states for total population growth, net migration, and growth in its young population over the past 10 years. These trends have only accelerated during the pandemic, which sparked an increased number of individuals, families, and businesses to relocate to Texas from high-cost states like California in search of lower taxes, more affordable housing, and fewer government restrictions.

Scroll down for more on Tennessee...

To find the cheap states with the most young people, researchers at Porch analyzed the latest data from the U.S. Census Bureau, the Bureau of Economic Analysis, and the Department of Housing and Urban Development. The researchers ranked locations according to the share of the population under age 30. Researchers also calculated the total population under age 30, the cost of living (compared to the national average), the median cost of a one-bedroom rental, and median earnings for full-time workers under 30. Only states with lower than average costs of living were included in the analysis.

The analysis found that the cost of living in Tennessee is about 10.3% below the national average. While it is among the more affordable places to live in the country, the latest Census data shows that just 38.5% of the Tennessee population is under 30 years old. Out of all U.S. states with below average living costs, Tennessee has the 13th smallest young population.

For more information, a detailed methodology, and complete results, you can find the original report on Porch’s website: https://porch.com/advice/cheapest-cities-with-large-young-populations

TOPIC: The Rutherford County Library System and a look at the Winter Reading Program