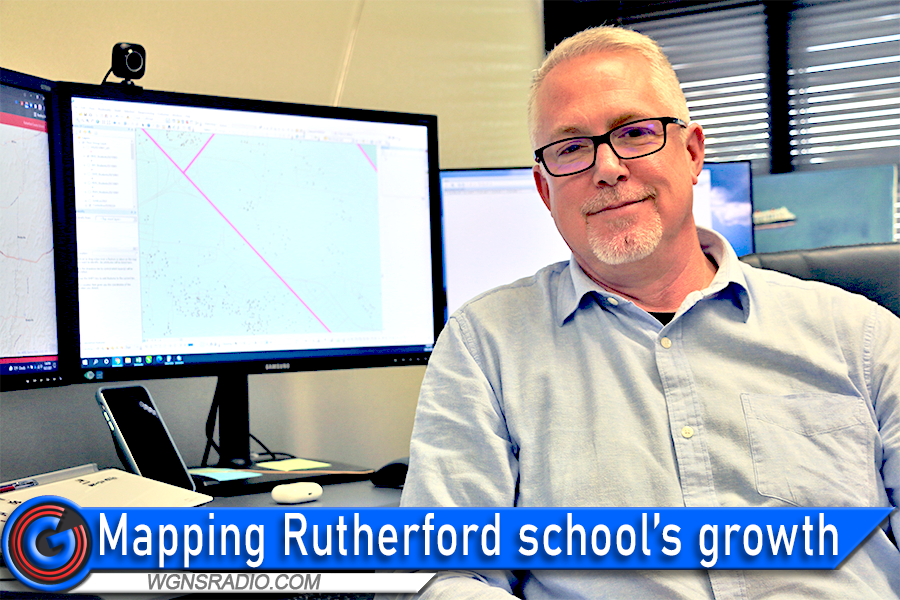 Above Photo of Shane Morgan / Story by Keith Cartwright

Growing up, Shane Morgan had an interest in drawing, drafting and industrial arts.

For a short time, he studied engineering technology at Old Dominion University, but left to pursue an appetite for culinary arts, which led him to working in the restaurant and hotel industry for five years before eventually enlisting in the U.S. Army.

While serving his country, a sergeant randomly asked Morgan if he could help figure out how use a new database designed to track military supplies — a DOS program on a green monitor that is now obsolete — the Virginia-native found a passion for numbers that led him to study geographic information systems at Austin Peay State University.

“I started doing some visual basic programming,” recalled Morgan, who worked for the city engineer in Clarksville building a mapping program for utilities and parcel development before eventually taking a job with Rutherford County Schools.

Morgan has been with the district for nearly 15 years as the Coordinator of Boundary Planning and Enrollment Forecasting.

Last week, he presented a pair of “very preliminary” rezoning options to the school board that will impact Rockvale and Riverdale high schools for the 2022–2023 school year. During the same work session, Morgan also presented two middle school options that could impact the Smyrna area for the 2023–2024 school year.

Scroll down for more details on growth and local schools in Rutherford County...

Director of Schools Bill Spurlock and board members will host a public meeting in November to discuss the high school options. The date of that meeting will be announced soon.

Morgan has been looking at enrollment numbers and community growth in both school zones for more than 18 months.

“I read the paper or watch the news. I talk to my coworkers, just to kind of see what’s going on and, of course, I have friends out in the community as well,” said Morgan, who has contacts from LaVergne and Smyrna down to the southern edge of the Rutherford County line.

He also has discussions with Trey Lee.

Lee is the assistant superintendent for engineering and construction for Rutherford County Schools.

Lee, who regularly attends planning and county commission meetings, has spent his entire professional career in commercial construction and has not only an understanding but also an institutional knowledge of the county’s growth pattern over the past two decades.

Rutherford County has grown from just over 84,000 people in 1980 to more than 341,000 residents in last year’s census, which was up nearly 80,000 in the past decade. The county cannot continue to grow at that rate without every school being impacted by rezoning issues at one point.

“If I see a trend, I bring it up,” said Morgan, who efforts to identify potential enrollment issues a couple years before they become problems, “but if it’s in an area that we have already been discussing, it makes it easier to analyze that area.”

Other times, Morgan might help to ward off unnecessary discussions.

For instance, prior to the recent annex at Oakland Middle School, a developer spoke at public board meeting about his plan to build 850 homes costing $350,000 to more than $400,000 each. Many of those homes would have housed two to three prospective students in the area, including Oakland Middle.

At the time, the housing market did not mirror the current market and Morgan let board members know he did not feel the development would be built out as fast as the developer would have liked them to believe.

“You go out there today and not even a quarter of that subdivision has been built out yet,” said Morgan, who noted the developer got a lot of exposure by publicly talking about his plans. “I’m sure the developer wants everything to happen and they’re going to get their name out there as much as possible, but the fact of the matter is the wheels of progress sometimes don’t turn that fast.”

That is precisely why Morgan collects information from as many sources and viewpoints as possible, including parents in the school zones being impacted, to take a wider, deeper view before creating as many as 50 option plans.

“And 50 is not an exaggeration,” said Morgan, whose job it is to narrow those options down to the two or three most optimal choices.