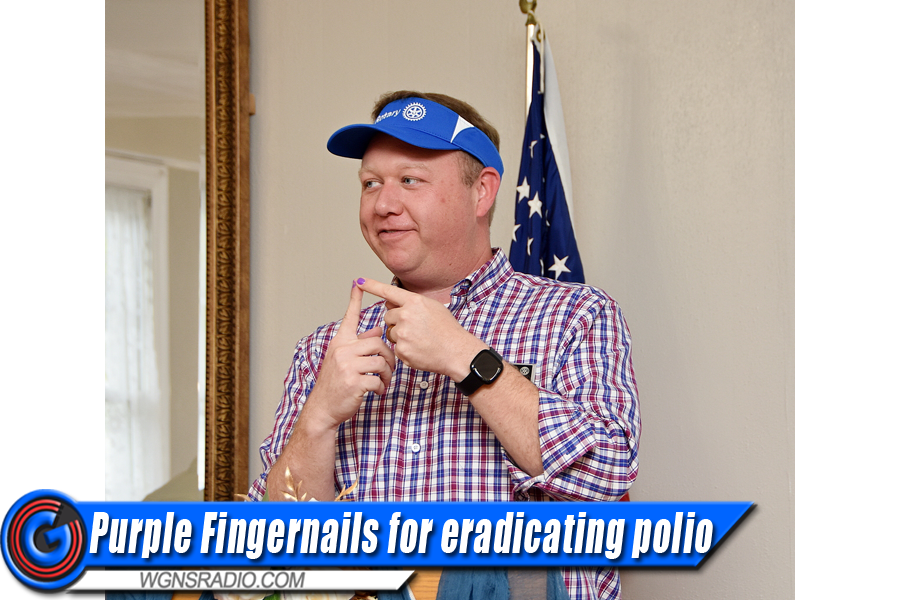 Rotarian Brett Garner had his fingernails painted purple to show his commitment to eradicating polio.

For those who may not have known, October was worldwide Polio awareness month. The Rotary Club of Murfreesboro along with the 62 clubs of  Rotary District 6760 recently participated in Purple Pinkie Donut Day to raise funds to combat Polio.  During this annual event, for every $25 box of donuts, $187.50 in matching funds from The Bill & Melinda  Gates Foundation, Rotary District 6760 grants and Dunkin’s Donuts across Middle and West Tennessee and  North Mississippi made its way to Polio programs around the globe.

Rotarian Brett Garner challenged his Rotary Club – the Rotary Club of Murfreesboro (aka ‘Noon Rotary’) – to purchase 29 boxes of delicious ‘Purple Pinkie’ donuts from Dunkin’ Donuts. He affirmed the challenge  by promising to have his finger nails painted purple. And Brett Garner was true to his word.

Thus Rotarian Brett Garner scheduled an appointment at Murfreesboro’s Posh Nail Boutique located at  120 Eleanor Way, behind Dunkin’ Donuts on Memorial Blvd. Ashley and Courtney were more than  courteous as Brett had his finger nails painted purple to honor his commitment to defeating polio.

While delivering a box to The City of Murfreesboro Planning Department, Brett was gifted with a cash  donation from Brian Ramsey, Land Development Manager of Beazer Homes. Participating club member  Bryan Nale, Loan Officer with Iberia Bank Mortgage said of his experience, “I enjoyed telling the story  behind the purple tipped donuts. In the U.S., many people are not aware that polio is still a threat to  children in developing countries.”

Countries where polio remains a persistent threat, children under the age of five are immunized twice  annually. With the impossibility of documenting millions of children receiving these vaccines the child’s  left pinkie is marked with a purple dye lasting about a month. Local communities recognize that children  with those purple pinkies will never develop polio, a reason to celebrate.

The 102 year old Rotary Club of Murfreesboro for this year’s event raised more than $8,000 and many  members delivered donuts to friends, community servants, and schools across town to spread a little cheer  as well as bring awareness to a noble cause.