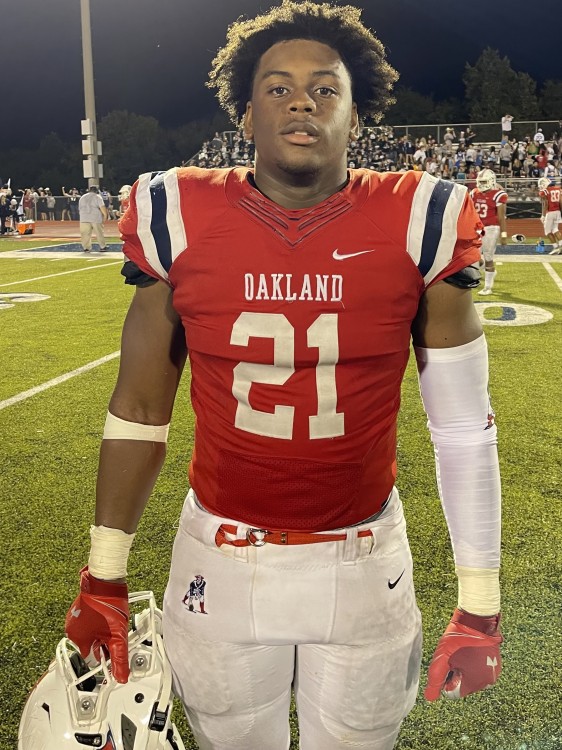 Senior Ethan McLaurin has been a mainstay for Oakland in 2021

When Oakland and Summit square off for the TSSAA class 6A state title on December 4 it will be a clash of gridiron goliaths. Neither has suffered defeat in 2021 and each captured a state title last season (Summit 5A, Oakland 6A).  What is the key to be crowned as tops in Tennessee? For the kids from Murfreesboro it may rest with the play of three extremely talented Patriots on the defensive line.

The Summit Spartans have one of the most dynamic playmakers at quarterback the mid-state has seen in quite some time. Senior Destin Wade has thrown for over 1300 yards and 17 touchdowns, but more impressively he has ran for over 2100 yards and crossed the goal line an eye-popping 29 times. Those type numbers could easily allow the term “unstoppable” to accompany Wade’s name in any descriptive sentence.

How do you combat a player like that and a Spartan offense that has averaged just over 40 points per contest? The age old football adage is big games are decided in the trenches. For Oakland that bodes well if their defensive front plays as they have all season.

Theron Gaines has been a statistical cyclone as he has twisted through lineman to the tune of  135 tackles. Even more impressively he has tallied 31 tackles for lost yardage. Those are super impressive numbers for a defensive end.

Ethan McLaurin has manhandled the opposition while using both speed and power to accumulate 68 total stops. With 26.5 tackles for loss, he too has been a monster of the midway.

Korey Smith has 77 total stops to his credit while recording 14.5 tackles for loss. Having stepped up all season, none of Smith’s plays were as valuable as the sack he recorded against David Lipscomb on the game’s final play.

“These guys are the cornerstone of our defense”, says Oakland head coach Kevin Creasy. “You have to pay attention to them if you are the other team’s offense. I am very proud of these kids for their performance thus far.”

There certainly will be more to this game than the battle between Summit’s superstar quarterback and Oakland’s defensive front, but it is a huge matchup. For Creasy, the approach to all of this does not have to be complicated.

“We understand they are a very good team”, says the Patriot mentor. “We have had a pretty good recipe for success so we just need to do what we do. We have played a very good schedule and have had to bring it each and every week. This one is no different.”

Kickoff for the BlueCross Bowl is slated for 7 pm eastern time at Finley Stadium in Chattanooga on Saturday, December 4.