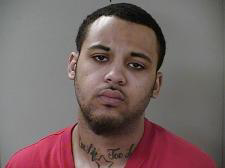 Resident Keenan DeShawne Massey told MPD Officer Westley Hall that they could enter his apartment when the officer arrived. Upon entering the unit, Officer Hall wrote in a report that he observed a loaded .22 handgun sitting on the kitchen counter. He also smelled weed and heard loud music and movement throughout the apartment.

Police reported that they found multiple bags of marijuana, loose marijuana, 48 individual baggies of Xanax, digital scales, rolling papers, four marijuana pipes, a marijuana grinder and cash inside the apartment. Massey admitted to officers that he sells one gram baggies of weed for $15 each and single Xanax bars for $5 each. Massey evidently had a prescription for the Xanax, but not a license to sell it.

Massey gave police permission to search the text messages on his cellphone where they confirmed numerous conversations involving the sale of both marijuana and Xanax.

Police made a phone call to Massey's roommate to discuss the drugs and drug paraphernalia found in the apartment, but he did not answer. Regardless, the drugs, a gun and cash were all seized as evidence. Police then left a business card for the roommate to give them a call when he returns home to his now drug free environment. So far, a return call has not been documented. Charges are now pending against the roommate.

Massey will face felony drug charges in a Rutherford County courtroom on June 30, 2016.