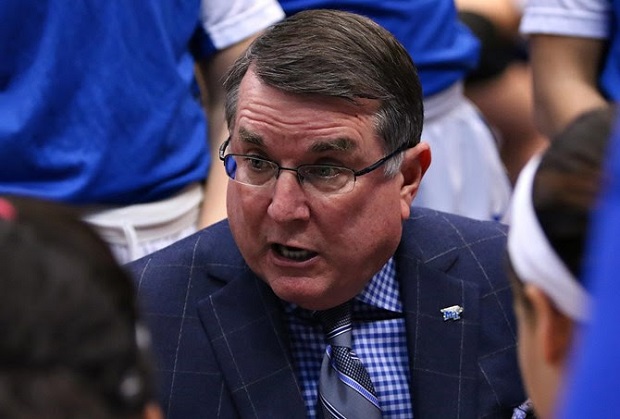 Middle Tennessee Head Women's Basketball Coach Rick Insell has been selected for induction into the Women's Basketball Hall of Fame. The announcement of Insell's inclusion as one of six inductees in the 2017 Class came Sunday afternoon.

The Lady Raider coach says he's humbled by the honor...

Insell has enjoyed a high level of sustained success for 40 years - 28 at the high school level and 12 at the collegiate level. He has a career record of 1,067-243 in 40 years and is Middle Tennessee's all-time winningest coach with 292 wins against just 94 losses.

Insell will join fellow inductees Sally Ball (official), Christine Grant (contributor), Louise O'Neal (veteran), Sheryl Swoopes (U.S. player) and Kara Wolters (U.S. player), who will be enshrined as the 19th class. The induction ceremony will take place at the Women's Basketball Hall of Fame in Knoxville during the weekend of June 9-10."I am truly humbled and overwhelmed by this tremendous news," Insell said. "To be included in the Women's Basketball Hall of Fame is one of the highest honors one can achieve, so to be recognized for contributions to a game I love and have dedicated my life to is exceptional."I share this achievement with my supportive family, every single person who has played for me from junior pro, junior high, Shelbyville High School, AAU and Middle Tennessee State University. I also share this with all of my assistant coaches and support staff through the years. They all have played a part in any success I have had."The Women's Basketball Hall of Fame will be the sixth such honor for Insell, who has also been enshrined into the National High School Hall of Fame; Tennessee Sports Hall of Fame; TSSAA Hall of Fame; Naismith Memorial Hall of Fame; and the Cannon Courier Sports Hall of Fame.The Women's Basketball Hall of Fame opened in June 1999 in Knoxville. It is the only facility of its kind dedicated to all levels of women's basketball. With the 2017 induction, the Women's Basketball Hall of Fame will celebrate its 19th anniversary and add six new members, honoring 157 inductees.Insell is one of just five coaches nationally to average 25 wins per season with a minimum of 10 years as a head coach, and he is ninth among active Division I coaches for winning percentage with a .756 clip.At Middle Tennessee, Insell's teams have won 20 or more games in each of his previous 11 seasons, and the veteran coach has guided the Lady Raiders into a national postseason tournament in each season. His teams have reached nine NCAA Tournaments and two WNIT events. The Lady Raiders also have won 15 conference championships under Insell (eight regular season, seven tournament).This comes on the heels of a remarkable career at Shelbyville Central High School, where Insell posted a 775-149 mark in 28 years while building it into a national power and state dynasty. Insell won a Tennessee state record 10 Class AAA championships, while finishing runner-up in five others. His team's hold the Tennessee state records for consecutive wins (110), consecutive state titles with four (1989-92) and most state championships with 10.