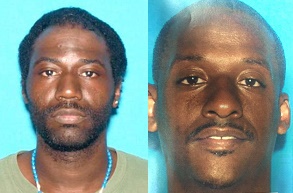 Smyrna Police are asking for your help in finding two suspects, who are alleged to be running an IRS scam.

Sergeant Bobby Gibson tells NewsRadio WGNS on October 23rd, Anthony Harvey Devon and Reginald Dale Gatewood picked up MoneyGrams totaling in the amount of $9,344.00 at the Walmart in Smyrna.

Devon and Gatewood have been running an IRS scam by contacting individuals in Georgia, California, and Oklahoma and claiming to be IRS agents. Gibson says they advise the victims that they are collecting delinquent taxes and will send police to arrest the victims if they do not pay their taxes immediately.

Devon and Greenwood then tell the victims they can take care of the problem immediately by credit card or electronic access to banking accounts sent via MoneyGram. These individuals are currently wanted on twelve felony charges and two misdemeanor charges.

Anyone with information regarding these two suspects is asked to contact Detective Allan Nabours with the Smyrna Police Department at (615) 267-5434.