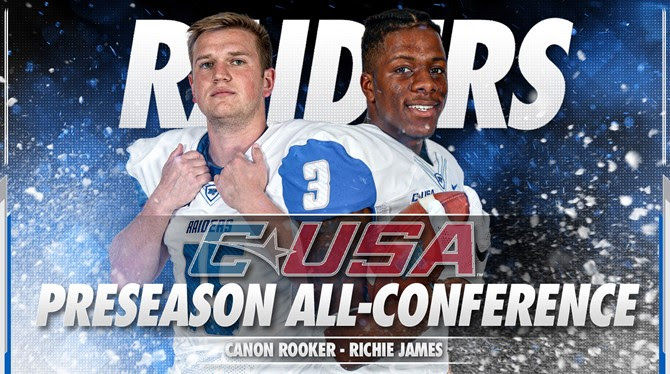 Two Middle Tennessee football players were named to the 2017 Preseason All-Conference USA as announced by the league office Monday.

Receiver Richie James and place-kicker Canon Rooker were selected to the preseason team, which is selected by the 14 C-USA head coaches, who can't vote for players on their team.

James is a two-time, first-team All C-USA selection and currently ranks second all-time in receptions and receiving yards at Middle Tennessee, while also standing fourth all-time in touchdown catches. He also has been named to the Paul Hornung Award Watch List as one of the most versatile players in the nation.

The dynamic performer was a first-team All C-USA selection and was voted MVP of the Hawai'i Bowl in 2016, when he was also named to the Beletnikoff Award and Maxwell Award Watch Lists. James had 105 receptions for a school-record 1,625 yards and 12 touchdowns while rushing for a career-high 339 yards. He led all receivers with 972 snaps played.

Rooker earned first-team All C-USA honors as a junior in 2016 after setting the Blue Raider record for most points scored by a kicker with 112. Rooker also has been named to the Lou Groza Award Watch List, given annually to the nation's top kicker.

The sure-footed Rooker connected on 16-of-19 field goal tries. The 16 field goals went down as the fourth-most in school history.

He did his best work against C-USA competition. Rooker was a perfect 10-of-10 on field goal tries against league members. His long for the season was 46 yards. He was 11-of-13 from 30 yards or more. Rooker also was 64-of-66 on extra-point attempts.

Rooker was among 14 kickers nationally who attempted at least 15 field goals and connected on 84 percent or better with an 84.2 success rate. He had nine consecutive field goal makes during one stretch which tied the second-longest such streak in school history.