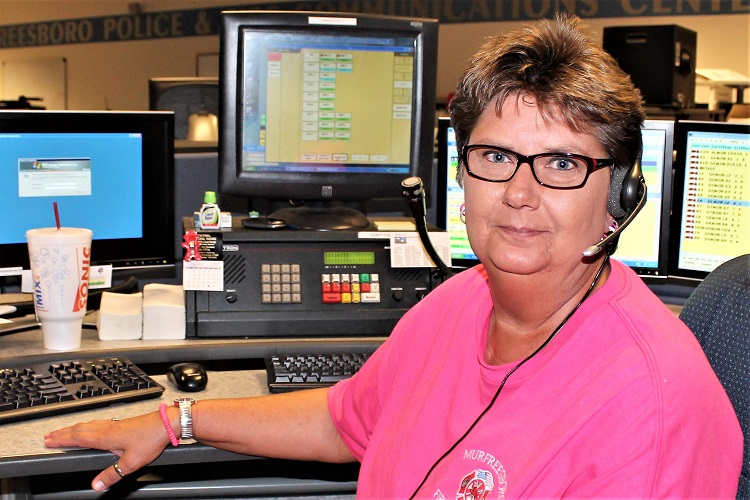 Dispatcher Janie Lawrence is officially the first career telecommunicator to retire from the City of Murfreesboro. Lawrence retired in July, just two months shy of 31 years of service.

She began her career as a police dispatcher in 1987. "Chief Doyle O'Brien got me an interview with then Commissioner Bill Jones," she said, "mainly because I needed a job...the place I was working for went out of business."

Janie joked while describing dispatch being in a small corner of the first floor of the old police building, "There was one radio and two phones. I believe those are in the Smithsonian somewhere now."

In 1990, Dispatch moved to the second floor of the Church Street location. Lawrence said that's also when they began dispatching for fire and started using computers. "I had no idea how to use a computer, or even what it was. We didn't grow up with them...didn't use them in school."

That is one thing that has been constant in her career...the technology and the training that goes along with it.

She recalled, "Being a dispatcher is not an easy life. The hours are long, your days off seem few, and you are the first line of communication in what can be the most difficult day in someone's life."

She said it took her about 10 years into the job to realize that she had to leave work at work. "As a dispatcher, you're not only responsible for your life, but you're also dealing with the lives of others,but at the end of the day you cannot bring those calls home with you. I have a lot of good stories, but I also have a lot of bad ones."

Over the years, Lawrence was able to meet many new people, "mostly over the phone," she kids.

She credits friendly officers and firefighters for making her difficult job a blessed one. "I have also been very fortunate to help many people...those on the other end of the line...and those who were new to dispatching."

Lawrence, a fixture in the department for the longest, was able to assist with training many incoming telecommunicators.

As for being the first to retire from the city as a dispatcher, Lawrence said, "They said it couldn't be done." She reflects on her mentor, Martha Lou Reed. "She was there when I started. She taught me a lot."

On Lawrence's last day, she said she looked up to the sky and said to Martha Lou, now passed, "There you go, Martha Lou...I did it!"

Lawrence does not have any particular plans for retirement. "Dispatching was rewarding, but it was also a tough job. I just plan on enjoying life for a while."

Chief Michael Bowen commented, "I have had the privilege of working with Janie for 30 years and I wish her the very best in retirement."

Fire Rescue Chief Mark Foulks commented, "It's no wonder that Janie has been honored as 'Telecommunicator of the Year' three times during her career. We already miss her voice on the radio. She was always cool, calm, and collected and as a first responder, that is very important. We wish her the best."

Lawrence's take on the future of dispatch? "The growth of the city and the growth of both the police and fire departments is tremendous. We need more dispatchers to accommodate that growth, but those people must have the heart. It takes a special kind of heart to do this."