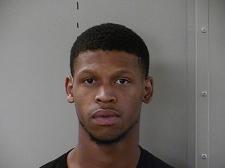 A 22-year old Journey Drive man has been arrested by Murfreesboro Police on charges related to a vehicle theft at the "3343 Memorial Apartment complex" at 2243 Memorial Blvd in Murfreesboro.

Tavaris Ross was arrested earlier this month (8-10-17) after being recognized from video at Wal-Mart allegedly using the victim's credit card. Detective Ed Gorham reports Ross was located and brought to the police department for questioning.

Gorham reports the subject confessed to breaking into two cars and using the credit card at TigerMart and Wal-Mart. Ross stated there was another subject with him and he's the one who stole the car.

Ross was charged with theft ($10,000 to $60,000), two counts of burglary to auto, two counts of theft under $1,000, and two counts of fraudulant use of a credit card. The stolen cards were recovered and the search continues for the other suspect.