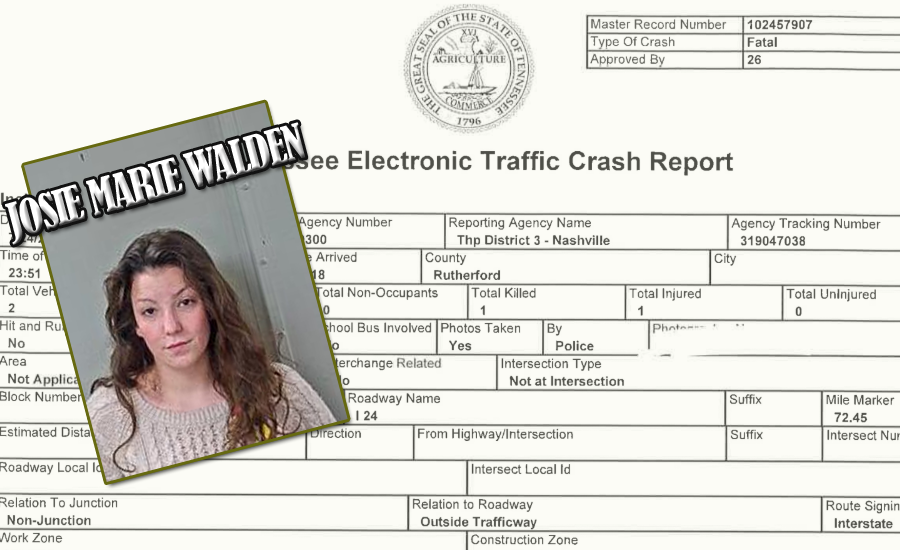 (MURFREESBORO - UPDATE) WGNS has more news on a 24 year old Murfreesboro woman arrested earlier this month in connection to a double fatality accident on Interstate 24.

In July of 2019, the Tennessee Highway Patrol was on the scene of a fatal accident in Rutherford County where a pedestrian was hit and killed on I-24 at mile marker 71, between Almaville Road and I-840. At the investigation site, a T-DOT truck was stopped on the side of the road re-directing traffic. The Highway Patrol noted in their initial report that the truck had emergency lights activated and a large arrow sign pointing to a secondary lane. Orange cones were also near the truck blocking a lane of traffic. The truck was there to warn motorist of the site being a construction zone and to use caution as police were at that location investigating a car Vs. pedestrian accident.

Ms. Walden was charged with driving on a revoked license and vehicular homicide. As of January 23, 2020 she remains behind bars in Rutherford County under a $40,000 bond.

Details of the case cannot be released at this time, according to the Highway Patrol. The case is now in the hands of the Rutherford County District Attorney's Office.

DISCLAIMER: All suspects are presumed innocent until proven guilty in a court of law. The arrest records or information about an arrest that are published or reported on NewsRadio WGNS and WGNSradio.com are not an indication of guilt or evidence that an actual crime has been committed.
Read more from:
News
Tags:
driving on a revokes, I-24, Josie Walden, Murfreesboro, Tennessee, THP, vehicular homicide, WGNS
Share: