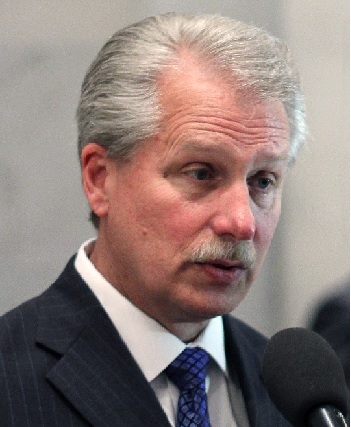 State Sen. Bill Ketron will file legislation enabling Rutherford County to hold a recall vote for elected officials indicted on felony charges. But he's holding up on a county request for a bill to let city and county legislative bodies suspend officials facing a felony indictment.

"I think after we've evaluated everything, it's kind of taken care of itself," Ketron said.

The Murfreesboro Republican pointed out city and county governments, as well as groups of residents can have the salary of an elected official suspended by petitioning the courts through an ouster lawsuit.

The Rutherford County Commission voted to send legislative requests to the local delegation, driven by felony indictments lodged against now-former Sheriff Robert Arnold, who pleaded guilty in January to three federal counts and faces a federal fine and prison sentence for corruption.

Arnold pleaded guilty of wire fraud, honest services fraud, and extortion. Each count carries a sentence of five to 20 years and $250,000 fine each. He will be sentenced later this year, but is currently being held behind bars in a federal prison.