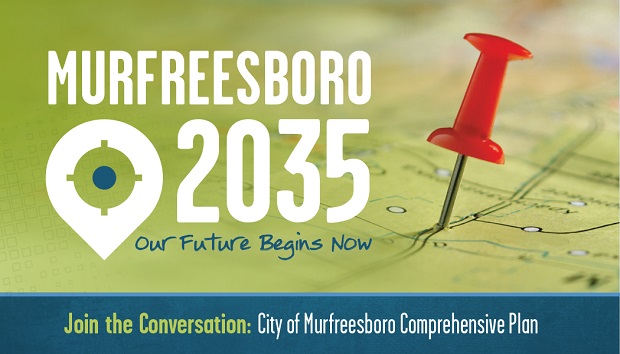 Murfreesboro 2035 Meets This Week
Posted on:

The Murfreesboro 2035 Task Force will gather this Wednesday as work continues on the city's 20-year comprehensive plan. The meeting will be held in the City Council Chambers from 5:30 until 7pm.

READ MORE »
City Council Says "No" To Handguns on Greenway System
Posted on:

A rather routine meeting ended up becoming an all-out debate of the 2nd amendment at Thursday night's meeting of the Murfreesboro city council...

READ MORE »
Reminder: Murfreesboro wants to hear from you
Posted on:

The City of Murfreesboro wants to hear from citizens as part of the process to develop its 20-year comprehensive plan. The community kickoff meeting, the first of three public meetings...

Mayor and council thanked the community for Tuesday's excellent National Night Out attendance, and urged citizen input for the upcoming 20 year comprehensive planning...

Murfreesboro to Gain NEW Comprehensive City Plan as Rutherford County is Forecasted to Reach 420,000 Residents Within 20-Years
Posted on:

City Manager Rob Lyons told WGNS they are in the process of putting together a new Comprehensive Plan.

City of Murfreesboro Seeking a NEW City Wide Comprehensive Plan for the New Year! Last "Plan" was Adopted in 1989...
Posted on:
The comprehensive plan, once formulated and adopted, will serve as the principal guide for community and governmental decision making regarding land use, zoning, transportation planning, utility capacity and construction, economic development, traffic management, recreation, capital budgeting, provision of municipal services and facilities, housing, and community engagement.
READ MORE »