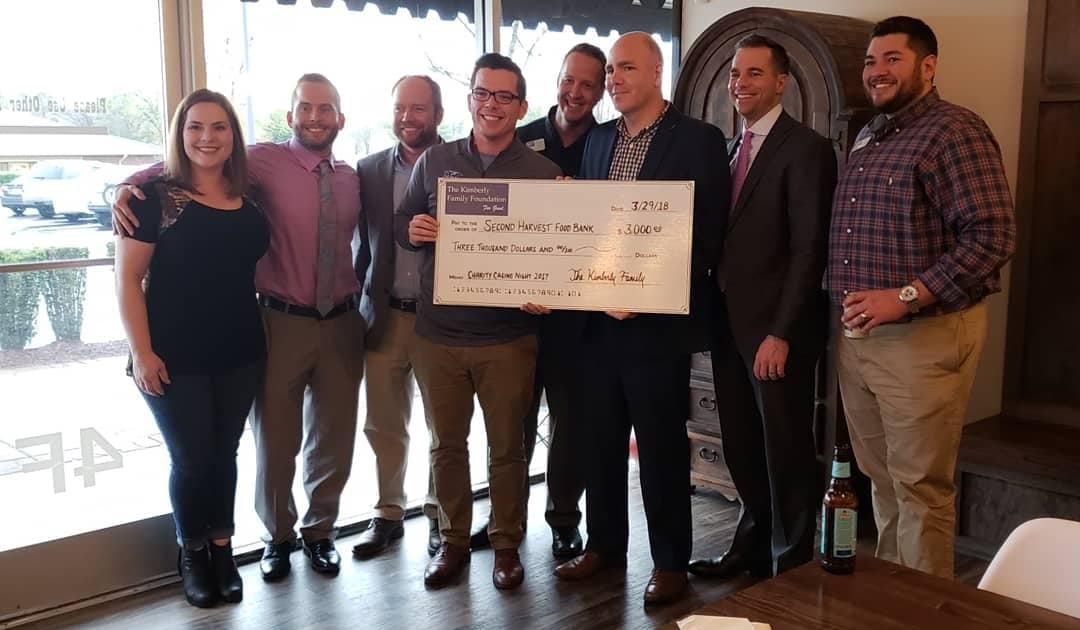 The Kimberly Family Foundation presented a check for $3,000.00 to Second Harvest Food Bank on Thursday night to sponsor a Mobile Food Pantry, which will take place at Greenhouse Ministries in Murfreesboro. The Foundation also announced other recipients of charitable giving in the coming year, including Endure Athletics and the Murfreesboro Rescue Mission.

"Our Charity Casino Night last year raised over $11,000.00," said Kimberly Family Foundation Board Chairman Scott Kimberly. "Because of the generosity of those in attendance, we are able to give half of that money to non-profits in this community for immediate impact, such as a Mobile Food Pantry, and also invest the remaining proceeds to support future giving."

A Mobile Food Pantry, operated by Second Harvest Food Bank, is a one-day, large-scale food distribution event that provides enough food for two hundred and fifty families to each receive one to two weeks' worth of groceries.

"We're so grateful to the Kimberly Foundation for the incredible work they're doing," said Taylor Loyal, Donor Relationships Manager for Second Harvest Food Bank of Middle Tennessee. "The Board has a real heart for helping people, and that's exactly what the foundation's financial support will do."

The Foundation announced that the 2018 Charity Casino Night has been scheduled for Saturday, October 27, 2018, at The Warehouse in Murfreesboro. Sponsorship opportunities are available. Tickets will be limited and will be opened to the general public at a later time.